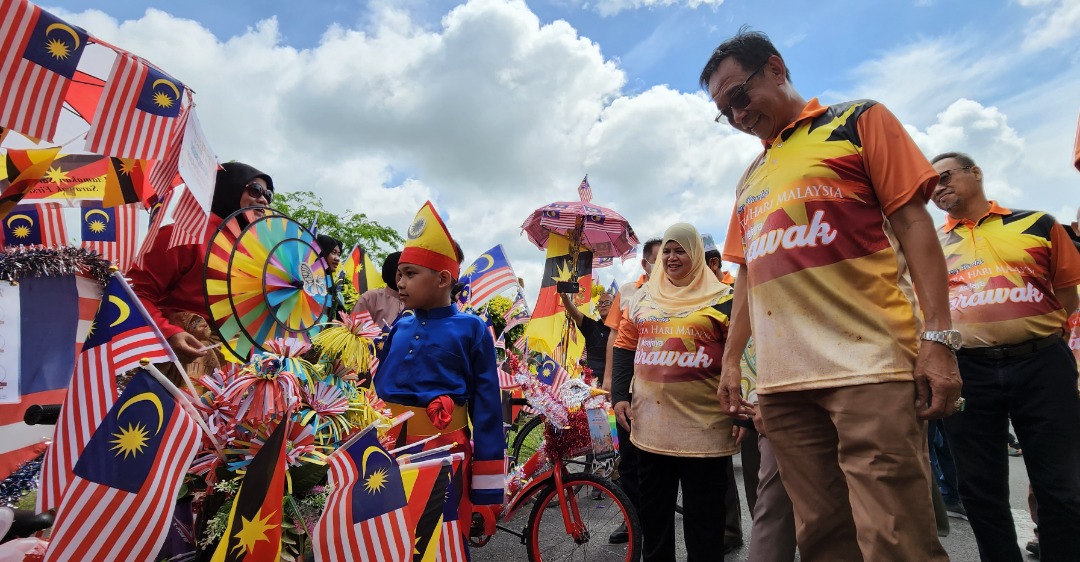 The programme, held for the first time in Asajaya this year, in conjunction with Malaysia Day, Sarawak Day and the National Day, saw an encouraging response especially from the locals.

The programme started with a motorised convoy parade led by the Minister of Tourism, Creative Industry and Performing Arts Datuk Seri Abdul Karim Rahman Hamzah along with over 100 riders from the community as they rode to the Asajaya Sports Complex as early as 11am.

“This joint celebration of Malaysia’s three historic days clearly gives a very strong sense of the spirit of harmony from the multi-ethnic population.

“I have been representing Asajaya for quite some time, but the programme this time can be said to be so perfect as it was celebrated by involving contingent representatives from the entire Asajaya village.

“What we can see is the involvement of various communities including the presence of children, youth, and senior citizens in order to support military veterans and it proves that the community here can live in peace without the problem of being suspicious of each other,” Karim said this while speaking at the ceremony to inaugurate the launch of the programme which will last for two days at the complex starting from today.

He added that the unity of the Asajaya community proves that the rapid development in this area has succeeded in shaping the community’s life in a more harmonious and progressive manner.

“This is the way forward for our country to always develop and what is important is that as citizens of Asajaya we take care of this area as best we can.

“Asajaya used to be known as an under-developed area, now everything has changed, for example in terms of transportation facilities, we used to only travel around by using river and sea routes,” he said.

He stressed that the issue of racial conflict needs to be curbed to avoid a similar incident, namely the confrontation that happened in the area in the 70s.

“We have seen various changes taking place, wherever we want to go, whether entering the Iban area, the Chinese or the Malays, we are all welcomed with open arms because we have come to know each other,” he added.