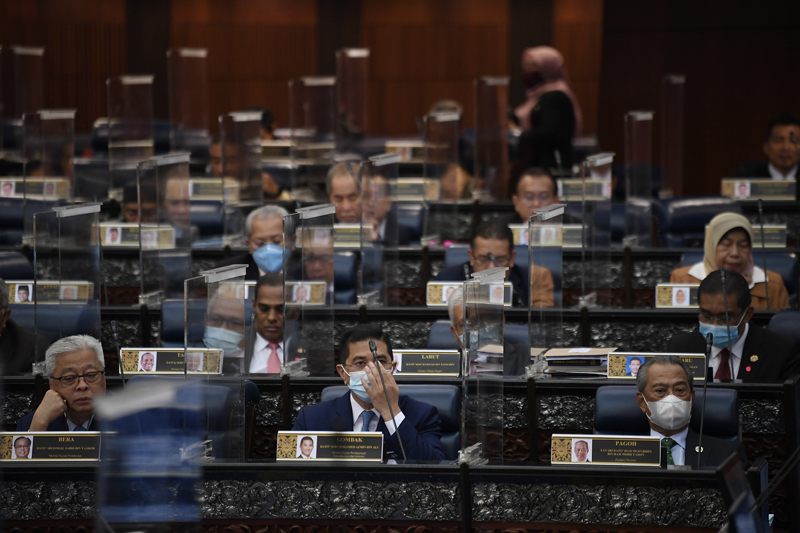 KUALA LUMPUR: The sitting of the third session of the 14th Parliament which adjourned on Dec 17 saw the country’s system of parliamentary democracy remaining intact and strong amid the political uncertainty and threat of the Covid-19 pandemic.

After the political crisis in February, which marked by the collapse of the Pakatan Harapan (PH) government and the appointment of Tan Sri Muhyiddin Yassin as the country’s eighth Prime Minister, the issue of the legitimacy of the Perikatan Nasional (PN) government continued to cloud national politics.

Focus was on the parliamentary sitting scheduled for May 18 after the then Dewan Rakyat Speaker Tan Sri Mohamad Ariff Md Yusof received a motion of no confidence against the Prime Minister which was tabled by the member of Parliament (MP) for Langkawi, Tun Dr Mahathir Mohamad.

However, with the ongoing Covid-19 pandemic, the first meeting of the third session of Parliament was only held for one day for the address by Yang di-Pertuan Agong Al-Sultan Abdullah Ri’ayatuddin Al-Mustafa Billah Shah at its opening.

Originally, the Dewan Rakyat sitting was scheduled for March 9 to April 16, but was postponed after the government implemented the movement control order (MCO) to curb the spread of Covid-19.

Concerned with the plight of the rakyat who were facing difficulties brought by the Covid-19 pandemic, Al-Sultan Abdullah called on the elected representatives not to drag the country into another political crisis.

The motion for a vote of no confidence as well as the motion of confidence for the Prime Minister were in the agenda of the second meeting of the third session of Parliament starting on July 13. However, Muhyiddin was seen as having majority support of the Dewan Rakyat after a motion on the vacating of the post of Dewan Rakyat Speaker was tabled, with 111 MPs supporting compared to 109 against it in the bloc voting.

Former Election Commission chairman Datuk Azhar Azizan Harun was then chosen as the new Speaker, while Datuk Seri Azalina Othman Said (BN-Pengerang) created history by being the first woman to hold the post of Deputy Speaker.

The 25-day parliamentary sitting was held under the new normal while the country was still in the recovery movement control order (RMCO) period with enforced adherence to the standard operating procedure (SOP) including wearing of face mask, ensuring physical distancing of one metre apart from each other and a glass partition placed in between the seats of the MPs to curb the spread of Covid-19.

Then the Dewan Rakyat sitting for the third meeting of the current session from Nov 2 to 17 with the 2021 Budget as the main agenda was mired in political wrangling when opposition leader Datuk Seri Anwar Ibrahim claimed to have strong and convincing support from the MPs to form a new federal government.

The first budget of the PN government, six months after forming the federal government, was not only eagerly awaited by the majority of the people and industries that have been adversely impacted by the Covid-19 pandemic, but was also a test ground for gauging support for the prime minister.

After being passed with a majority voice vote at the policy level, the 2021 Supply Bill then faced a challenge from the opposition bloc when nine of the 27 ministries went through the process of bloc voting before the bill was passed at the committee level.

Also drawing attention was the incident of three parliamentarians undergoing the house surveillance order (HSO) after coming into close contact with someone who was positive for Covid-19, being present at the parliamentary sitting for the voting process, wearing personal protective equipment (PPE).

The biggest budget in the country’s history, involving an allocation of RM322.5 billion, was eventually passed via bloc voting which saw 111 MPs agreeing to it, 108 disagreeing while one was absent.

Two parliamentary seats became vacant following the death of the then Minister in the Prime Minister’s Department, Datuk Liew Vui Keong (Warisan-Batu Sapi) on Oct 2 from lung infection and Datuk Hasbullah Osman (BN-Gerik) on Nov 16 due to heart failure.