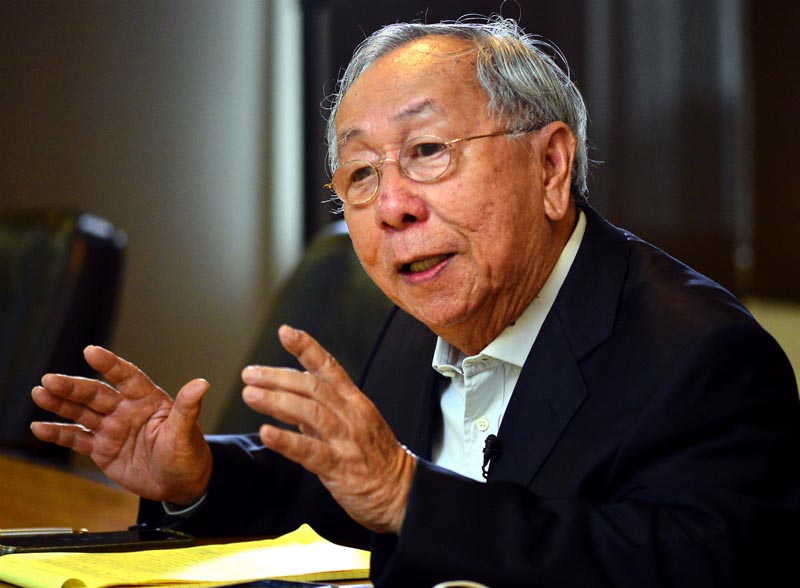 KUCHING: Parti Pesaka Bumiputera Bersatu (PBB) has come a long way since its formation in 1973, and is now one of the the largest political parties in the state.

The success enjoyed by the party is due to the unity of members as well as management of the party by its leaders.

In a special interview in conjunction with PBB’s triennial delegates convention (TDC) which begins today, Linggi said the contributing factors to the party’s success are – good leadership, having the right structure and discipline shown by the party members.

“At my age, I ask myself why is PBB so successful? It is so vital that once we know the rationale, that will be good as our guide to manage not only our party but our state in the future,” he said.

Linggi, who is the eldest son of Tun Datuk Patinggi Tan Sri Temenggong Jugah Barieng, whom he calls Apai Tun, has retired from active service in PBB since 2002, but is still a loyal member of the party.

“I’m just as what you call a arm chair observer in politics, but it is my pride and pleasure to witness how successful PBB is as a party, how they are doing so well in running the state, and being the backbone not just Barisan Nasional (BN) Sarawak then but Gabungan Parti Sarawak (GPS) now and also the backbone of Sarawak politics,” he said.

Here, New Sarawak Tribune sat down with Linggi for his insight of the party.

Q: You were one of those mostly involved in the merging of the Bumiputera Wing and the Pesaka Wing into one entity to what is called Parti Pesaka Bumiputera Bersatu (PBB) today. Can you share with us the formation of PBB?

The late Apai Tun and Tun Abdul Rahman Ya’kub were the ones leading leading the parties in the early 70’s and their main objectives were how best to harness the strength of the Bumiputera as a political force.

This is the thing that comes to my mind, because at that time in the 70’s, there were many parties. So Apai Tun and Tun Rahman were talking about how best they can harness the people together so that a strong political force can be formed, and this is also so that the state can be safe and successful.

How do they harness that force? They said by merging the two parties – the Pesaka Wing and the Bumiputera Wing.

They decided in 1973 to merge the two entities. I think this is what I call the right structure. The idea is to protect, preserve and ensure the Bumiputera community could be part of managing the state.

Why not other names, but have the party named PBB?

Why did Apai Tun and Tun Rahman not name the party as other names? No. They said PBB. Meaning to say that the identity is being preserved and recognised.

How do they do that? ‘Bersatu’ is the means of doing that. This is a very interesting strategy actually. And Apai Tun and Tun Rahman focused on unity, because uniting people is not easy. Let alone unite the two communities.

They encountered many challenges, but were successful in the end, why? Because the identity is being preserved and recognised. The principle they established is ‘selang seli’ (alternating) principle. This means that, if the president comes from the Bumiputera Wing, then the secretary-general has to be from the Pesaka Wing.

This can be seen when Apai Tun was the first president of PBB, Tun Rahman was the secretary-general then. When Apai Tun retired from politics, Tun Rahman became the president, and I was the secretary-general until 2002. The same goes to the Youth Wing, if the chief comes from the Pesaka Wing, then the Women Wing’s chief comes from the Bumiputera Wing.

Therefore, when you see the ‘selang seli’ structure, it works well.  Members appreciate that.

Now, what is the guarding principle? The main objective… How do you achieve that Bumiputera force? As a political vehicle, they said PBB is a trustee of Bumiputera interests. That ‘Bumiputera’ means the Bumiputera community – Malay, Melanau, Dayak, Bidayuh, Orang Ulu and so on.

Anything to do with the Bumiputera, if they are not treated well, PBB will fight. I think that principle has been instilled in many of us. This is why most of us never leave the party. As far as I am concerned, I’m always a one-party man. Hence, this is a very very significant issue. That is the role of our leaders.

The importance of ‘Bersatu’?

‘Bersatu’ is the key word. It is a process, work in progress. Actually, we not only assist the party but the Bumiputera in Sarawak as a whole. How to achieve that? We must maintain the current PBB status and strength in future.

Number one, ‘Bersatu’, is being fair not only to the component members but to Sarawak Bumiputera as a whole.

The other aspect is, our PBB members are very disciplined, where we even see all the key positions are not contested. Some people laugh at it, but actually that is the key to success, because you should not challenge your leader.

The Chinese have a saying, “Two lions cannot share the mountain.” So the same goes to the party, you must not have teams in the party, but you can also share your views. If there is disagreement, talk among yourself in the room. You know, just like husband and wife, you don’t go to the media and tell them how good or bad your husband or wife is.

No doubt to have teams are good for to comply with the democratic process. But it is bad for party management. Remember how some parties collapsed in the past. They collapsed because there were quarrel between the leaders. Let us learn from other peoples’ mistake and avoid that so that PBB will last long to protect the Bumiputera and Sarawak’s interest.

Furthermore, the relationship between the component parties in Gabungan Parti Sarawak (GPS) is so very good. Look at now, GPS members are very close to PBB, they know that PBB’s objective is not to kill them but to work together to govern the state.

Views on the party’s past presidents?

One thing you noticed is that PBB never challenges the leader. There are other people who challenged our leaders back in 1987, but we beat them all. That is why we are so very disciplined.

After Apai Tun, then came the second president of PBB, (Tun Pehin Sri) Abdul Taib Mahmud (1977 – 1978), after which Tun Abdul Rahman Yakub took over from 1978 to 1981. Taib was again elected as the fourth president of PBB in 1981 and served til 2014. He lasted for over 30 years because he did well as a leader and was noted for his liberalism.

Then after Tun Pehin Sri Taib, came the unforgettable Pehin Sri Adenan Satem, popularly known as Tok Nan. He called a spade a spade, someone who spoke out his mind. He was the one who triggered … who opened the window for us to negotiate on the state’s rights with the federal government.

Now, to the current president Datuk Patinggi Tan Sri Abang Johari Tun Openg … if Tok Nan opened the window, Abang Johari pushes the door open. Now Sarawak leaders have been indicating to those in the Federal government to give Sarawak what is due to them. This is because, after all, we form Malaysia so that we have a better life. That is why Abang Johari really pushed for our rights under Malaysia Agreement 1963 (MA63) to be given back .

To compare all of them, I said that they are similar. One continues what was done by the other. Abang Johari goes much further than Tok Nan because he is the Premier and wants to bring goodies to Sarawak so that we will have a better life. This is important. And now Sarawak is very much on the forefront, even among those in Malaysia to push towards green energy to preserve the environment. Overall, Sarawak is doing very well now.

No doubt, some smaller parties talk about not wanting to be in Malaysia. But I think that is not the issue. Malaysia is our nation, our heritage, we have our responsibility and duty to make Malaysia a more successful nation. If the respective state in the country is richer and better, Malaysia would be stronger.

Don’t forget. Malaysia is a federal nation, each state has a duty to develop itself with the assistance of the federal. The more we develop , the better our nation will be. Therefore, Sarawak’s loyalty cannot be questioned, because Malaysia is our nation.

With the implementation of Undi 18, what is your advice to PBB, especially the Youth Wing, in bringing in or cultivating the younger generation for the good of the party?

Looking at those aged 18, they just completed school, their mind is very fresh. Therefore, PBB bringing in these aged groups will be good.

Getting them involved, they can contribute fresh knowledge. How does the party accommodate it? I think PBB has its own system, to form a new wing or not.

But accommodating those 18 years old is the right thing to do. We start them early, because among them, they will become our leaders in the future. Not only that, the party must also bring in those who are interested in politics, especially those who have academic backgrounds to give us various perspectives.

What is your hope for PBB?

I have high hopes for PBB. But there is already a right recipe for success, we have good leadership.

PBB has a good future. The future is now actually, it is already good, and I’m sure it will continue to be a successful party.

I’m confident that PBB will do extremely well, with the correct strategy and the rapport with other parties in GPS are so good.

Most important, for party members, always abide by your principle. The ‘selang seli’ principle must be perpetuated.

Don’t create any team in the party. Work as a unit.  I think that is the recipe for success.