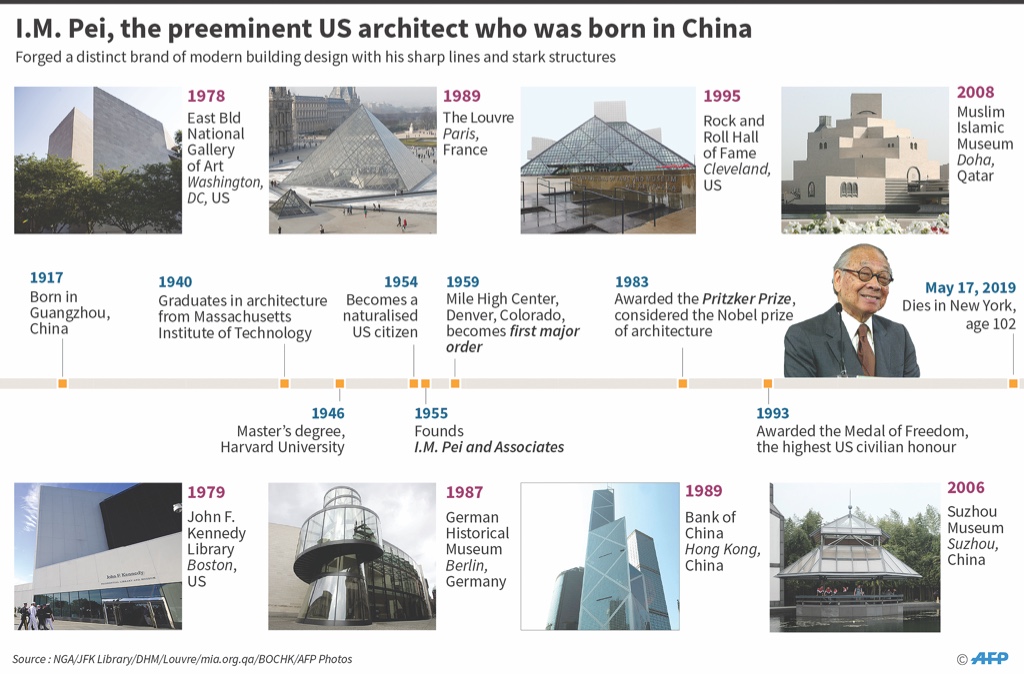 NEW YORK: I.M. Pei, the pre-eminent US architect who forged a distinct brand of modern building design with his sharp lines and stark structures, has died in New York, his sons’ architecture firm said Thursday. He was 102 years old.

From the controversial Louvre Pyramid in Paris to the landmark Bank of China tower in Hong Kong, the Chinese-born Pei was the mastermind behind works seen as embracing modernity tempered by a grounding in history.

“Contemporary architects tend to impose modernity on something. There is a certain concern for history but it’s not very deep,” Pei, with his owlish round-rimmed glasses, told The New York Times in a 2008 interview.

“I understand that times have changed, we have evolved. But I don’t want to forget the beginning,” he said.

“A lasting architecture has to have roots.”

His work earned the 1983 Pritzker Prize, considered architecture’s Nobel. Of his nearly 50 designs in the United States and around the world, more than half won major awards.

Born in China in 1917, banker’s son Ieoh Ming Pei came to the US at 17 to study architecture, receiving an undergraduate degree in the field from the Massachusetts Institute of Technology in 1940.

He then enrolled in Harvard University’s Graduate School of Design, where he received a master’s degree in architecture in 1946. He became a naturalized US citizen in 1954.

In one standout undertaking, he deftly inserted into the monumental structures of the capital of his adopted country the modern angles of the East Building of the National Gallery of Art, opened in 1978.

It was “a composition of angular stone forms…that remains the most visible emblem of modern Washington,” said a New York Times review 30 years after its unveiling.

French president Francois Mitterrand was so impressed that he had Pei hired to build a glass pyramid into the courtyard of the Louvre, the world’s most visited museum.

The project was deeply controversial in Paris and Pei endured a roasting from critics before the giant glass structure opened in 1989, but his creation is now an icon of the French capital.

Other well-known and characteristic Pei projects – often graceful combinations of geometric planes – include the Rock and Roll Hall of Fame and Museum in Cleveland, Ohio; the Miho Museum of Shigo in Japan; the Morton Meyerson Symphony Center in Dallas and The John F. Kennedy Library in Boston.

He brought drama to the Four Seasons Hotel in Manhattan and Raffles City in Singapore.

His Fragrant Hill Hotel in Beijing, completed in 1982, was intended to incorporate technology and indigenous building principles in a blend that would open the way to a particularly Chinese brand of modern architecture.

Despite being a confessed Islamic art novice, Pei was also commissioned to design the Museum of Islamic Art in Doha, Qatar, which opened in 2008 to great fanfare.- AFP