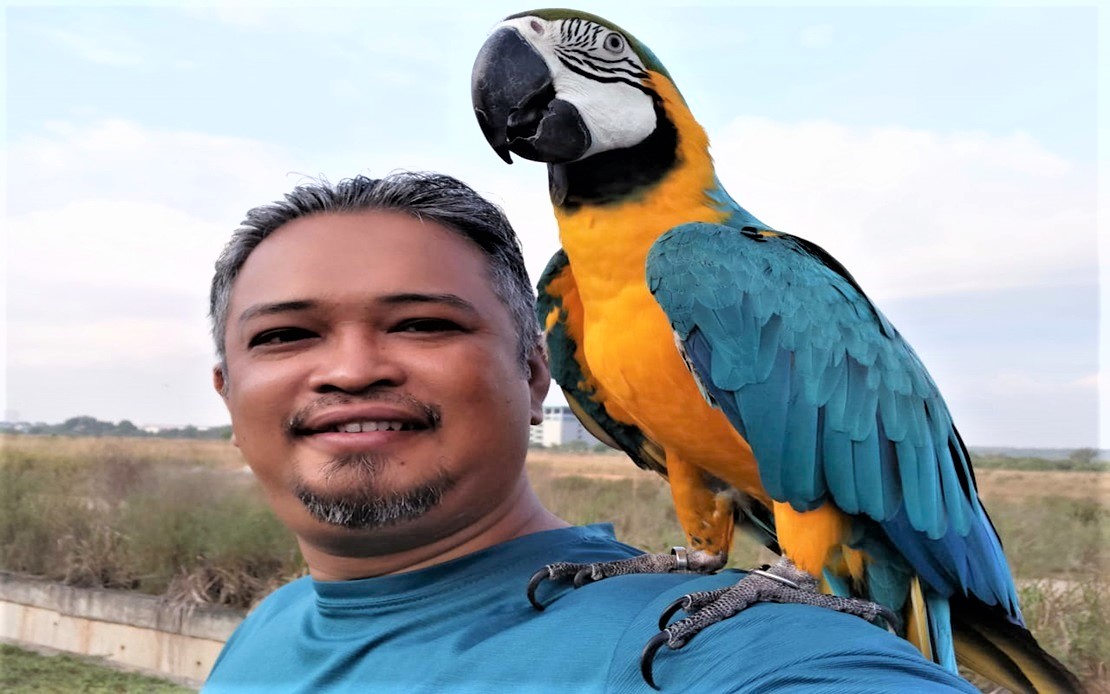 CYBERJAYA: Every weekend, prior to the implementation of the movement control order, a group of pet parrots of various colours and species, would gather on the fringe of a residential area in Cyberjaya, accompanied by their owners.

Various species of parrots such as Hahn’s Macaw, and the Blue and Gold Macaw, whose height can reach almost one metre tall as well as the Cockatoo, would fly free according to activities performed by their owners.

Two participants in the free fly activities are Coco, a Blue and Gold Macaw, and Betto, an Indian Ringneck, both belonging to Masri Mahmud, an information technology engineer, who has been involved in keeping parrots as a serious hobby since 2018.

“When I was a child, I used to like to see pictures of these colourful birds on a box of colour pencils and on television, but then resources to have one as a pet were limited,” he told Bernama, adding that he had acquired 13 birds since he started his hobby, but currently he has only Coco and Betto. The rest were either flew away or died.

The father of three said that caring for the birds was akin to looking after a baby because of the health aspects as well as their diets, as the birds also have allergies.

“Perhaps many don’t know that parrots cannot eat avocados as it can be fatal. Any milk-based food or drinks, or even chocolate should not be given to them at all,” he said, adding that parrots have a life span of between 50 and 80 years if looked after properly.

Coco and Betto eat bird pellets, beans, fruits and vegetables including broccoli, mustard, pumpkin, mango, papaya and uniquely, parrots also like to eat ‘cili padi’ (bird’s eye chilli) because they have no sense of taste, especially for spicy food, unlike humans, he said.

Sharing about Coco and Betto’s activities, Masri said that birds also experienced stress, especially when they are confined in cages or with no outdoor activities.

“If they are stressed, they will start plucking feathers using their beaks. This indicates that they are bored, and we have to play with them or take them for a free fly activity so they can be physically active,” he said.

Masri said that Coco and Betto are good at ‘talking’, with the words that they often heard such as ‘kakak’ (sister) when wanting to eat, apart from ‘abah’ (daddy), hi and hello.

On the health aspect, Masri said an adult parrot should weigh between 900 grammes and 1.2 kilogrammes only, and exceeding that is considered obese.

“Regular health check-ups are also done every six months to ensure that there are no fungal infections, digestive problems or other diseases caused by eating disorders,” he said.

Masri also has a plan to acquire a Green-Winged Macaw, which costs up to RM20,000, due to his deep interest in such a bird as well as its vibrant colours.

According to Masri, the implementation of movement control in the country curbed the free-flying activities of parrots, and parrot owners living in other districts could not gather as usual.

“We also have a Free Fly Parrot Malaysia support group on Facebook for a large team of parrot owners in the country. Various tips and information sharing on bird care can be obtained from the group,” he said. – Bernama

The most natural form of fun and adventure

Praise for MetroCity Square as expats gush at ‘best decision’

The return of vinyl records

DARO: The establishment of the Malaysian Family Community is...