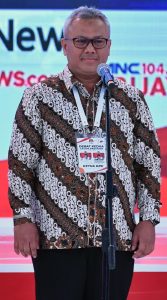 JAYAPURA: From sending ballot boxes by elephant in Sumatra to keeping voters safe in Papua’s rebel territory, Indonesia is pulling out all the stops for one of the world’s biggest one-day polls across a vast archipelago of 260 million.

On Wednesday, over 190 million registered voters in the Muslim-majority country will cast their votes in just eight hours of polling, with the election commission battling torrential downpours, voter fraud and damaging cyber attacks.

And if that wasn’t hard enough, the world’s third-largest democracy behind India and the United States is staging a first for its two-decade-old system, which rose from the ashes of a military-backed dictatorship: holding presidential, parliamentary and local polls all in one day.

“This is a very big country so we’ll do our best,” Arief Budiman, the commission’s chief, told a recent gathering of journalists and diplomats. “But we’re very busy this year.” He’s not kidding.

Calling on four-legged transport, motorbikes, speedboats and planes, officials have been distributing cardboard ballot boxes – guarded by armed security staff – to every corner of the 4,800 kilometre long archipelago, which is home to hundreds of ethnic groups and languages.

While elephants carried ballot boxes through Sumatra’s Aceh province, horses were used to reach to remote communities in the southeast corner of Java island.

“The path is muddy during the rainy season so we need to use horses to transport election material,” said Suhartanto, the police chief in Tempurejo sub-district, who goes by one name.

The lightweight ballot boxes – replacing metal ones used in previous polls — are up to the job, Budiman insisted, declaring them to be “very strong”.

“You can sprinkle water on them – but not a flood,” he said. This was confirmed this week near Jakarta when hundreds of spoiled boxes were left in a muddy heap after torrential rain flooded a storage warehouse.

Plastic bags are being inserted into the boxes to protect millions of ballot papers in a tropical country used to pounding rainstorms.

A record 245,000 candidates are vying for public office, with current president Joko Widodo facing off against ex-general Prabowo Subianto for the top job.

The polls kick off early Wednesday at over 800,000 plus ballot stations staffed by millions of election officials, starting in easternmost Papua where a separatist insurgency has simmered for decades.

Security will be tight in parts of the mountainous region after rebels massacred more than a dozen employees at a state-backed contractor in December.

Violence also erupted as election material was delivered before local polls last year, resulting in the deaths of several police and election officials.

But armed rebels aren’t the only election challenge in Papua, which shares an island border with independent Papua New Guinea.

Voters in parts of the mineral-rich region use a communal voting system called “noken”, in which a village head collects votes and represents the group at the ballot box.

It is a challenge to the concept of direct voting and a headache for local officials who have tried – and failed – to change the fraud-prone system in a country where vote buying is already rife.

“Also, what often happens is that the number of votes that are actually filed can be different from what was agreed upon by the group, which leads to cheating.”

Meanwhile, police on the tourist hotspot of Bali this week scuffled with a small group of Papuans who staged a rally calling for people not to cast a ballot.

Training millions of electoral officers – many working an election for the first time – has been another challenge.

A few staff at each station were trained, and then expected to teach the rest of their colleagues, as tens of millions of voters work out who to vote for among the sea of candidates.

Jupiter to appear brightest next Tuesday

California to release up to 8,000 inmates to stem Covid-19 outbreak

Hagia Sophia to open for all