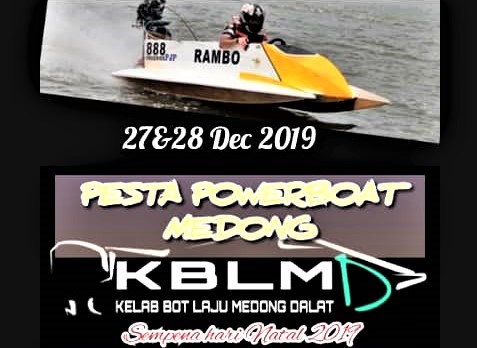 DALAT: A Powerboat Festival will be held here from Dec 27 to 28 in conjunction with this year’s Christmas celebration.

Organised by Medong PowerBoat Club (KBLMD), it has received the support of and contribution from Dalat assemblywoman Datuk Seri Fatimah Abdullah.

According to the event’s coordinator Patrick Ibul, the festival has attracted powerboat enthusiasts from Dalat and surrounding areas.

“For this edition, we are launching entries for women and men aged 18 years and above as well as open to all powerboat enthusiasts in Dalat area.

“This powerboat festival is an annual event in Kampung Medong and the response from the locals is very encouraging,” he told Sarawak Voice yesterday.

“The main requirement to participate in the festival is that they must have the ability to operate the powerboat and must have good cooperation with the safety team during the race and adhere to the requirements.

“It is also my hope that the effort to hold the festival every year should be continued as this powerboat sport has a positive impact as well as boosting the socio-economy of the locals.”