From September 10 to 15, more than 370 skilful craftsmen, renowned figures of culture, scientists and scholars of Oriental studies and media representatives attended the 1st International Handicrafters Festival 2019 held in Kokand, the gateway to the Ferghana valley of Uzbekistan.

From there, our journey took almost 5 hours the next day by train to an overwhelming welcome by thousands of locals from Kokand and its surroundings. At the train station, young and old were dancing in their folk costumes to the tunes of their unique traditional musical instruments. It was a rare occasion to witness and experience such jubilant spirit and friendliness in the masses. That first impression was a plus sign for a festival being hosted for the first time ever in this Central Asian country. 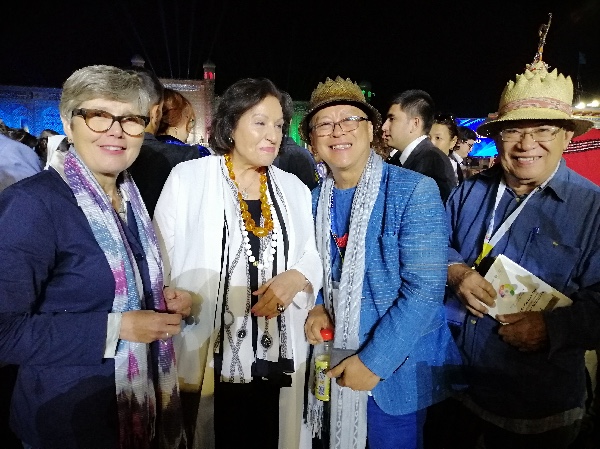 The first International Handicrafters Festival 2019 initiated by the President of the Republic of Uzbekistan, Shavkat Mirziyoyev, was a great success and shall hereafter be held every two years.

It was a splendid idea to gather great craftsmen from every corner of the country to showcase their folk arts and culture to the world. Whilst at the same time, international artisans from abroad also demonstrated their skills in a variety of crafts.

The remarkable event, aimed at strengthening friendship and co-operation and to promote cultural and humanitarian ties, was staged over five days of activities in Kokand. The charming and very clean provincial city, filled with thousands of people daily, has intriguing historical structures alongside new buildings which were erected just months before our arrival.

To house the sudden influx of guests for the festival, many new hotels were built to accommodate them as well as future tourists who may want to visit Kokand, being a hidden gem that is launched to the world as a new cultural destination.

The city was once the capital of the ancient Kokand Khanate and in the times of the Old Silk Road, silk and spices from all over the world were gathered in its bazaars.  Today the bazaars are still exciting and we came away laden with goods and excess baggage.

The festival programmes kept us busy daily. The first evening saw the renowned designer, Edric Ong from Kuching, showcasing a unique collection of eco-friendly textile and fashion which caught the attention of various TV channels who interviewed him.

We took part in the first day parade where we had to pose for numerous wefies with the locals. Over a hundred thousand people were gathered and we are grateful to our guides and translators for getting us effortlessly from one site to another.

There was also a conference where speakers from various countries shared on the “Prospect for the development of handicraft and folk applied art.” It was well attended by scientists, specialists, representatives of the spheres of culture and tourism from more than 30 countries, professors and teachers of domestic and foreign higher education institutions, students, museologists, art historians and artisans.

A point taken was that promotional information should be furnished and festivals or exhibitions held to raise public awareness of the importance of the handicraft industries. We should therefore encourage internal and external marketing of traditional handcrafted products to prevent their extinction.

At the heart of the festival was a huge park showcasing the crafts from the twelve regions of Uzbekistan. With such varieties of crafts and demonstrations from both local and international craftsmen, it took us days to view them all. In the mild heat but cooled by fresh water running along shallow drains, we enjoyed every moment of it and many a time were coaxed by the Uzbeks into dancing sessions which continued into the night. 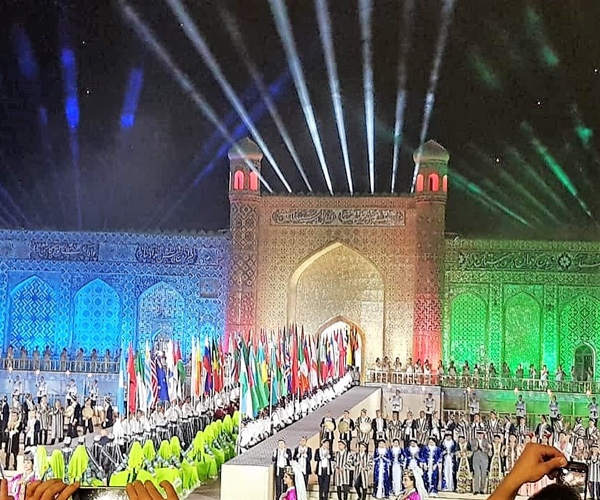 The most spectacular had to be the Grand Opening which was officiated by President Shavkat Mirziyoyev accompanied by the first lady of Uzbekistan and their beautiful daughter.

Indeed, it even felt like being in an Olympic of the Arts as flag bearers emerged from the grand doors of the magnificent Khudayar Khan palace to the announcement of the names of respective nations.

It was such a spectacular sight to behold as hundreds of dancers moved to the beats of drums and the folk music of Uzbekistan’s provinces, against a backdrop of coloured lights projected upon the beautiful exterior of the palace.

As the celebrations carried on, bread with sweet halvas and nuts were passed around within the audience. It is the norm for anyone to simply get up from their seats and dance. In a single night there were many smiling faces, friendships made and renewed. When the fireworks appeared, all were dazzled and we congratulated Uzbekistan on its success of holding its first international handcrafters festival in the unforgettable city of Kokand. 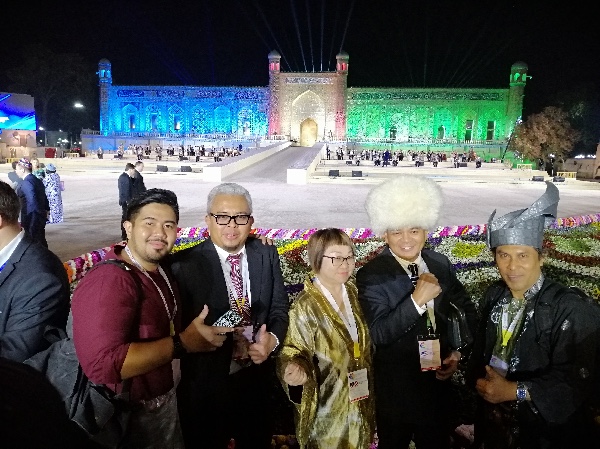 The city was declared a World Crafts City at this festival, but that shall be highlighted in my next article together with some very interesting crafts.

Another milestone for Swinburne students