KUCHING: Kapit Division Disaster Management Committee has chided Parti Sarawak Bersatu (PSB) for attributing the surge in Covid-19 cases in Kapit to a recent visit by the chief minister.

Its advisor Jefferson Jamit said the surge in positive cases was attributed to pre and post-Gawai activities for which the results of swab tests taken before June 10 were only released on June 21.

“The results were received on 21 June which was 11 days after the visit by the chief Minister to Kapit on June 10.

“According to the Health Department, cockfighting sessions held in Ulu Pelagus and Merit areas before and during the Gawai celebration too had contributed significantly to the surge.

“The index case, a man from Belaga was tested positive for Covid-19 at the Bintulu Hospital,” he said on Wednesday (June 23).

Jamit said the surge had nothing to do with the chief minister’s visit to Kapit on June 10 as alleged by PSB in the print and social media.

“Some people are merely exploiting the situation to take pot shots at our leaders to suit their conveniences,” he said, adding that it was merely an attempt to stir public resentment against the government.

On the vaccine rollout in the division, he said it was still actively being pursued despite the logistic problems and challenging demographics.

He said as of June 21, 31.6 percent out of the total 96,723 residents who had registered had received at least one dose while 10 percent had received the full dose.

“We have many static vaccination centres besides the mobile teams and the Flying Doctor Service teams.

“It will help if all parties refrain from making wild and baseless accusations.

“At the same times, politicians can play their part by advising and insisting on the people to continue to observe the standard operating procedures (SOPs) faithfully besides getting vaccinated,” he said.

PRS Women all set and ready 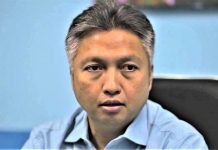 Give time for Parliament to prepare for sitting