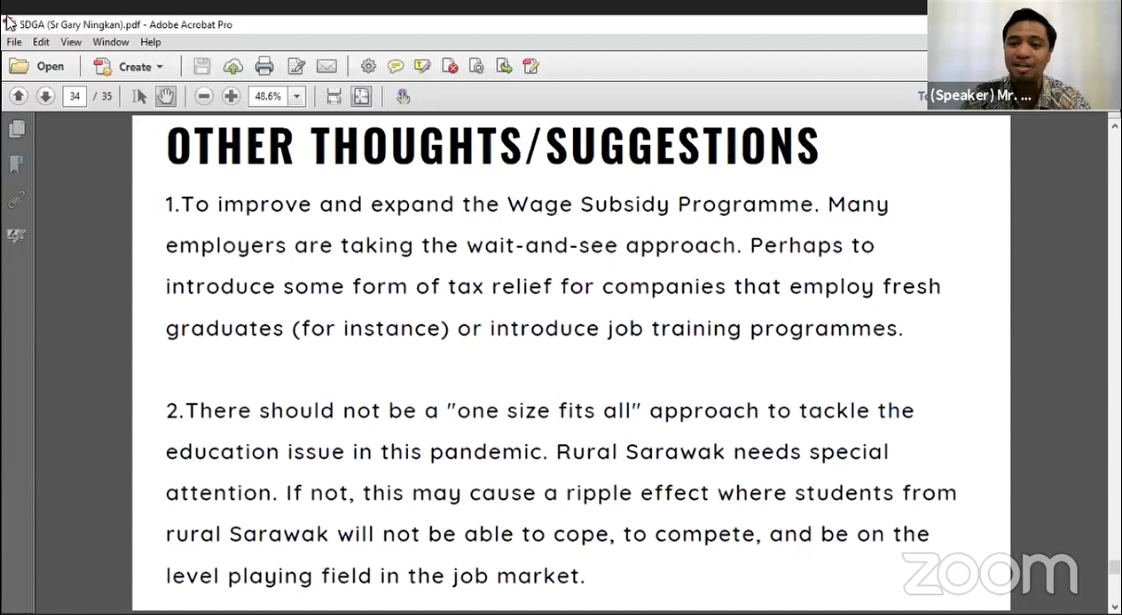 Putrajaya should give special attention to rural students

KUCHING: Sarawak Dayak Graduates Association (SDGA) says there should not be a ‘one size fits all approach in tackling the issue of education inequality in the rural areas.

“Rural Sarawak needs special attention. If not, this may cause a ripple effect where rural students will not be able to cope, compete, and be on a level playing field in the job market,” SDGA president Gary Ningkan said.

He pointed out that rural students were already on the losing end – facing poor connectivity and yet still having to sit for the same public examinations as other students in more advantageous situations.

“The (federal) government should look into this. Sarawak cannot be treated like any other state due to its geographical differences and so on,” he said during a webinar entitled ‘Narrowing the Gap, Broadening the Unity’ organised by Yayasan Perpaduan Sarawak (YPS) yesterday.

He noted that there were over 1,000 dilapidated schools in rural Sarawak, adding that the poor infrastructure and connectivity faced by rural students was even more apparent during the pandemic.

At the same time, he noted that there were also numerous positive initiatives carried out by the government and he hoped that rural teachers and students would be able to benefit from them.

He said education was supposed to be a means for rural Sarawakians to improve their wellbeing and escape poverty, but due to the current employment situation, they were at a disadvantage.

“Based on recent statistics, around 50 percent of graduates take more than six months to finally gain employment,” said Gary, who is also senior vice-president of Sarawak Dayak National Union (SDNU).

On the issue of the rising number of unemployed graduates, he proposed that the Wage Subsidy Programme be improved and expanded.

Citing data released recently by the Department of Statistics Malaysia (DoSM), he said the number of unemployed graduates had increased by 22.5 percent last year to 202,400 compared to 165,200 in 2019.

Explaining why this had occurred, he said there had been an influx of around 200,000 new graduates in Malaysia, creating a very competitive job market.

“On top of that, the current pandemic has caused many companies to downsize or close shop, resulting in fewer openings in the market,” he said.

Touching on SDGA’s initiatives to alleviate the issues at hand, he said they were constantly promoting verified job openings particularly in Sarawak as well as working with a few local institutions to help get young unemployed Sarawakians to go for upskilling while seeking for job opportunities.

“We are also collecting data of unemployed graduates to better understand their situation so that we can carve our future programmes at our soon-to-be-completed Invent Space,” he said.

Gary said SDGA also encouraged and embraced the gig economy, viewing this as an effective avenue for many Sarawakians to generate income in these trying times.

“In addition, we are constantly encouraging our fellow Sarawakians to become job creators. There are not enough jobs in Sarawak and this is a problem.

“The real issue is that we will be seeing a lot of brain drain happening in Sarawak, and this is something that we do not want to happen,” he said.