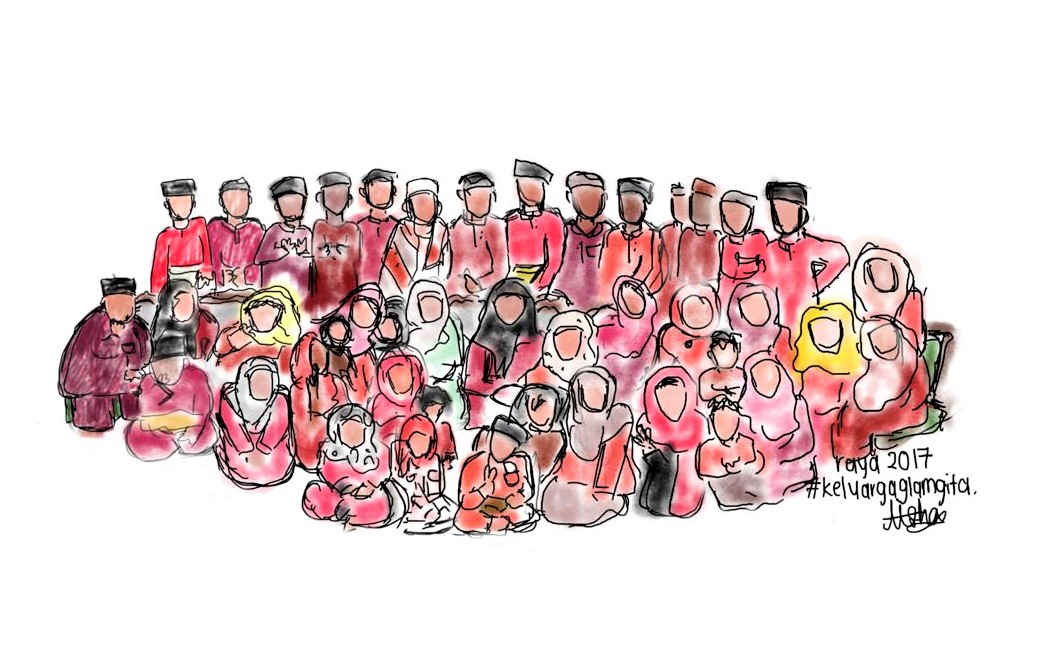 Raya this year was not the same for Aziza Aznizan and her family. What is usually a lively affair turned sombre and mellow as most of her family members were stranded in different parts of the world. Instead a gloomy celebration, Aziza and her cousins decided to spruce up the celebration with a ‘homemade’ Raya song.

From global philanthropist to a budding singer — Aziza Aznizan knows no bound. Stuck at home in Kuching during the movement control order (MCO), the 23-year-old lass was unable to continue her volunteering programmes under her Paint the World (PTW) organisation. She then turned to singing, among many others, to occupy her time.

Filled with memories of Raya, and how everyone was disappointed that Raya was ‘cancelled’ this year, Aziza and her cousins tried to bring the mood back and they did not fail. She released a song, composed and performed together with her cousins, on Youtube called ‘Raya PKP’.

Loyal listeners to local radio station Hitz Sarawak can instantly recognise Aziza’s voice, accompanied by sound of her guitar in the background, along with the sounds of laughter from her little cousins, as the song get much airplay throughout Raya.

“MCO was bringing down the festive mood and I feel like i wanted to make the best out of Raya during this testing period.”

Choosing to look at the bright side, Aziza said we are lucky that we get to celebrate Raya during one of the most significant times in world history.

The inspiration came when her cousin Fitri suggested that they write a song about it. “I immediately said yes. And we started writing that very same night. We stayed up till 2 am writing the lyrics and the chords.”

Enthusiastic of how it will turn out, Aziza and Fitri taught their younger siblings and cousins to sing the song the following day and performed it for their family.” She recalled that on the day, other family members were on Zoom video conferencing. “Each person video-called a family member who were stuck somewhere else. We performed the song, and everyone in the room and on video started to cry.”

The mellow mood of a locked down Raya was then swiftly replaced by bursts of joy and laughter. “Music can make so much difference! In the beginning, everyone was downhearted, but we sang together and everybody became exuberant!” she said.

“We also made sure that we mention family members here and there so the whole family could relate to the song.”

According to her, the family-oriented song was also intended to make everyone feel better by saying ‘Raya tahun tok simple ajak’ (this year’s Raya will be a simple one). Bits and pieces of the song were filled with memories of the festive day.

“We even rhymed canopy with PKP because during the previous Raya in kampung, everyone will set up canopies for open houses. We also made sure the kids screamed ‘sikda canopy?’ (no canopies?) in the song.”

Funny, cute and light-hearted, Aziza revealed that the song was made with raw talents. Every one of her family members were involved, including her sister in Australia. “She even drew cartoon versions of our family members for the music video.”

Aziza revealed that if you listen closely, you will hear the voices of children and young adults in the song. “It was a challenge and kind of a headache to record because one kid would start to cry, and when she stopped, another one will put on a long face. And another one would scream into the microphone, while the others would sing totally different lyrics at times!”

While it was frustrating to continue, she shared that it was all worth it in the end. “Even though we were on lockdown, stuck with family members who are 99 percent tone-deaf with no talents in singing, and no quiet room in the house — we managed to make a song dedicated to all Malaysians. We are in this together,” added Aziza.

Singing has been a passion for Aziza, and she recalled purchasing her first studio set at 14. “I was always that annoying person in the karaoke room, hogging the microphone.” Music to her is an inspiration and motivation to do so many things in life.

“Music helps me when I’m sad, nervous, happy, excited, in love and homesick. I remember composing songs about home when I was overseas.

One time i was feeling sad, I just picked up my guitar and started singing about Laksa! And it instantly made me feel better.”

As a philanthropist, Azniza realise how powerful a singers’ influence is compared to a politician. “Everyone knew what Beyonce had for lunch rather than the fact that Crimea became Russian territory again.”

Following through with her passion, she is currently recording a new song with her cousin, Fitri. “I wrote the song during the MCO and my friend from Barcelona will be the producer.” She mentioned that the song is called ‘2020’. Apart from that, the co-founder of PTW disclosed that she is lining up future activities for PTW as the recovery movement control order (RMCO) is implemented.

RAP
Here we go!
balit dari UK, ada slang okay
what are you speaking there? Is that Malay?
Sorry i sik stand, sebab i speaking,
I dah lama study lua, place called Reading

A lesson of life