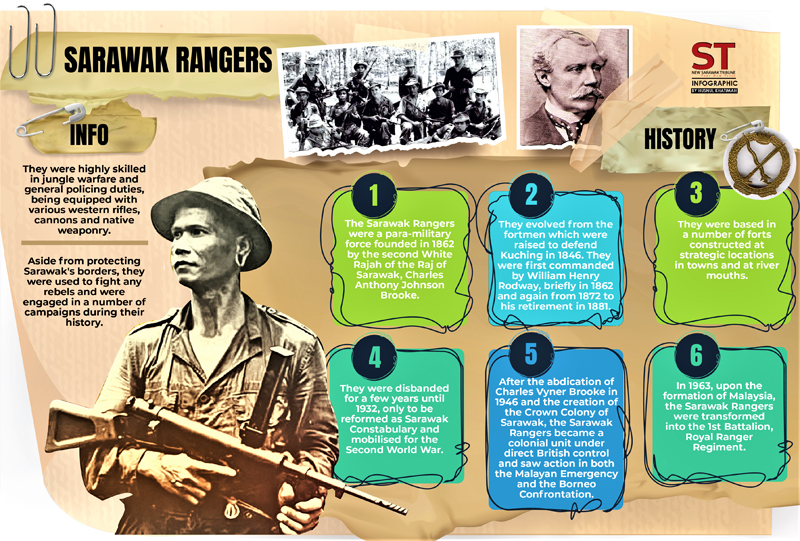 KUCHING: The Sarawak Community Policing Association (SCPA) is appealing to the federal government to consider reactivating Sarawak Rangers to assist in patrolling the state’s border with Kalimantan, Indonesia.

SCPA chairman Datuk Seri Victor Hii said by reviving Sarawak Rangers it would create more employment opportunities for Sarawakians while simultaneously strengthening border security as the locals are familiar with the state’s territory.

“Today, there is a possibility that the estimated number of illegal workers in Sarawak might be around 500,000 or more,” he said today.

He pointed out that besides reviving Sarawak Rangers as an alternative to curb the entry of illegal immigrants into the state, there must also be a stronger government to government (G2G) collaboration between Sarawak and the federal government to ensure there is enhanced security measures along the borders.

While he welcomed the suggestion by Deputy Chief Minister Tan Sri Datuk Amar Dr James Jemut Masing on building fences or walls at strategic locations along the 1,032km state border with Kalimantan, Hii said the government should enhance or increase its deployment of skilled resources including the armed forces, the police, Malaysian Maritime Enforcement Agency (MMEA), the immigration department and other government agencies responsible for border security.

He also suggested that the state and federal governments equip Sarawak with resources needed to boost border security including providing state-of-the-art technology to monitor the borders, train security personnel with requisite skills, and improve infrastructures such as roads and trails for ease of movement.

“The use of AI–enabled technology can effectively strengthen our border security and curb the influx of illegal entries. These technologies include AI-enabled cameras and sensors to detect movement, surveillance drones that are able to monitor and scan a land area within a 30km radius, and biometrics technology such as facial recognition to identify illegal immigrants,” he said.

He pointed out that it would require collective efforts from all segments of the society, non-governmental organisations (NGOs) and communities to highlight suspicious activities, temporary hideouts, or staging points to the authorities to curb the problem.

He added that for instance in Malaya, rat trails and landing points used by illegal immigrants in areas such as Selangor and Kedah were identified and being monitored 24/7.

“While we acknowledge the benefits of hiring foreign workers to assist with Malaysia’s economic activities in labour-intensive sectors such as plantation, construction and manufacturing, Malaysian employers must be encouraged and educated to employ only documented workers to avoid being penalised by law.

“We wish to highlight to employers that it is important to hire only documented workers from bordering countries as it will help us safeguard the safety and well-being of Sarawakians, their livelihood and businesses, especially now with the Covid-19 pandemic,” he stressed.

He applauded Masing for his unwavering commitment in ensuring the safety and wellbeing of Sarawakians, and hoped that the state government would reconsider the proposed cost effective and sustainable measures to enhance the state’s border security for the greater good of its people.