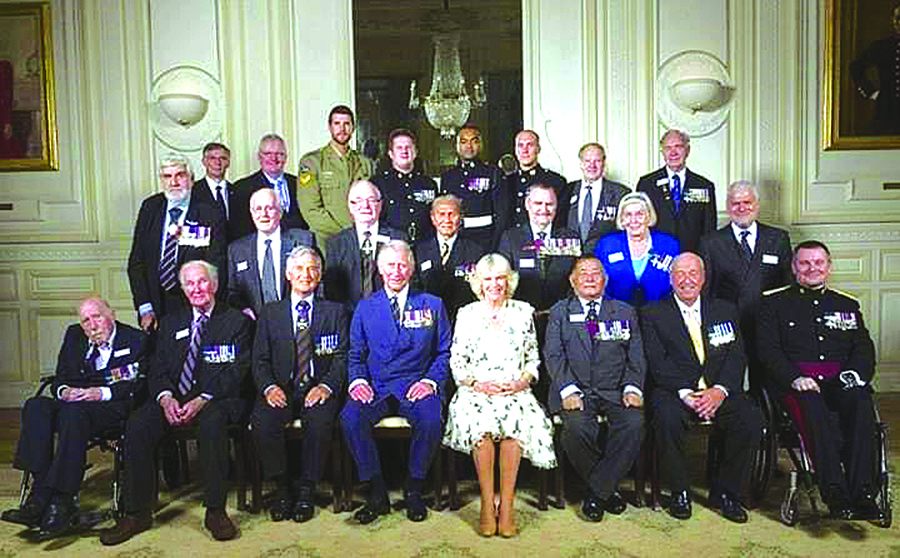 Former scout with the 10th Platoon, D Company, First Battalion of the Worcestershire Regiment, Sgt (Rtd) Datuk Awang Raweng, who is highly respected for his exploits against communist terrorists in the 1950s, is now older and unable to communicate well.

In fact, over the past four years, the Nanga Skrang Iban, has spent most of his time in bed because of his deteriorating health due to pneumonia.

Despite his unsatisfactory health, Awang, the nation’s sole recipient of the George Cross Medal — the highest gallantry award for military honours — warmly welcomed our reporter, who visited him recently.

He is actually 104 years old

“In his third marriage (with my late mother), they were blessed with six children — Menaul, Kenyalang (died two years ago), Douglas, myself, Giok (died at the age of three) and Lily.

“According to records, he was born in 1927. However, he once told us that he was born earlier than that and his age is now actually 104 years!” said the 53-year-old Panggau.

Started his career as a scout

Awang enlisted with the British Army as a scout in December 1950. After one month of training, he was attached to 10th Platoon, D Company, First Battalion Worcestershire, Sherwood Foresters Regiment, based in Kluang, Johor.

“His service as a scout began on Jan 1, 1951 for a period of six months with a wage of $62 a month. At that time, the British strongly believed in the abilities of the Iban people who were very knowledgeable with the ins and outs of the forest.

“They will not get lost even if they are released in any thick forest (without referring to a map) — that is the skill that they have, that the British greatly admire,” he said.

Every old practice that most Iban trackers had in the past would strictly adhere to certain taboos.

According to Panggau, in the past, his father was strictly forbidden to touch blood when he was at war and if violated, bad consequences would happen.

“According to my father, he was shot by the communists because he accidentally touched the blood of Pvt Griff Hughes while rescuing him.

“The incident happened during their routine jungle patrol (in Kluang, Johor) on May 27, 1951 where they were ambushed by about 50 communists.

“Two members of the platoon, the lead scout and section commander, were killed.

“During the action, Pvt Hughes fell wounded in the middle of the track, and my father, who had been shot through the thigh and lying in an exposed position, dragged Pvt Hughes under the cover of a fallen tree (at this point, he had violated the taboo). From behind the tree, he then defended Pvt Hughes and continued to engage the terrorists when they tried to approach.

“Eventually, he was shot again, shattering his right arm. He then took a grenade in his left hand, held it up and dared the bandits to come and try to kill them. The bandits withdrew.

The coolness, fortitude and offensive spirit displayed by Awang were of the highest order. Despite being twice severely wounded, he showed the utmost courage and resolution to continue the fight and protect his injured comrade.

Awang’s bravery was later recognised by the British government and he was awarded the George Cross medal by King George.

The then Governor of Sarawak, Anthony Abell, also sent a telegram to Awang which read:

“I congratulate you most sincerely on the high honour which His Majesty the King has seen fit to confer on you. The George Cross is the highest decoration which is open to civilians and is awarded only in cases of conspicuous courage and gallantry in circumstances of extreme danger. The whole country is proud of you and you have added great distinction and honour to the name of Sarawak and the Iban people. “

Impressed by hospitality of British monarch

Further elaborating, Panggau said after receiving the George Cross medal, his father would attend Queen Elizabeth II’s birthday celebration as a guest of honour every two years, and at the same time, he also attended the reunion of the Victoria Cross and George Cross Association.

“I have accompanied him to London four times and I am very impressed with the hospitality given.

“At the ceremony, he was celebrated as a dignitary and as a hero. More interestingly, he was also given the opportunity to meet Queen Elizabeth II and other royal family at Buckingham Palace,” he explained, adding that the last time he accompanied his father to London was on May 13, 2018.

According to him, during the week they were in London, his father, including accompanying family members, were treated well by the military officers who accompanied them.

Attacked by shortness of breath in London

“I remember, my father suddenly suffered from shortness of breath that he had to be rushed to one of the hospitals in London after he attended his first programme at the palace — and he was admitted for a day.

“I was very surprised to see the hospital bill which reached RM2,700 but, everything was managed by the responsible party.

“According to the invitation, my father was supposed to attend the same ceremony last May, but due to the movement control order and health reasons, he did not go,” he added.

Although Awang received special monthly remuneration — RM45.62 for medical purposes and over RM800 for the George Cross award — Panggau felt that the amount did not commensurate with the services and sacrifices of his father, who had risked his life to defend the country.

“In conjunction with the Independence Day celebration in 2005, where my father was also invited to Kuala Lumpur, I had planned to meet Datuk Seri Najib Tun Razak, who was then the Defence Minister.

“However, it was not easy to meet him so I decided to follow him to the bathroom, and at that moment, I told him what had happened.

“Thankfully, after some time, my father started receiving a remuneration of RM2,000, which he receives till today. Thank you, Malaysian government!” he said.

In addition, he said after the meeting, his father was also presented with two houses (one concrete and the other wooden), built in Nanga Skrang by the Malaysian Armed Forces.

Panggau also hoped that there would be other remunerations for his father to acknowledge his sacrifices.

“At the same time, I also hope that the names of the country’s fighters, including my father’s, will not be forgotten by the people, especially the younger generation.”

He has also been conferred the honorary master’s degree in education strategy by Universiti Pertahanan Nasional Malaysia in 2015.

Donated his land to develop school

According to a spokesman for SK Nanga Skrang, Awang was the founder of their school, donating more than three acres of his land to be used as the school site.

It was originally built by the villagers using wood donated by Simanggang Sawmill Sdn Bhd and was upgraded to a new building in 1967, and still remains to this day.

What Malaysia Day means
Previous Post
Come, let’s sing the Negaraku in unison, shall we?