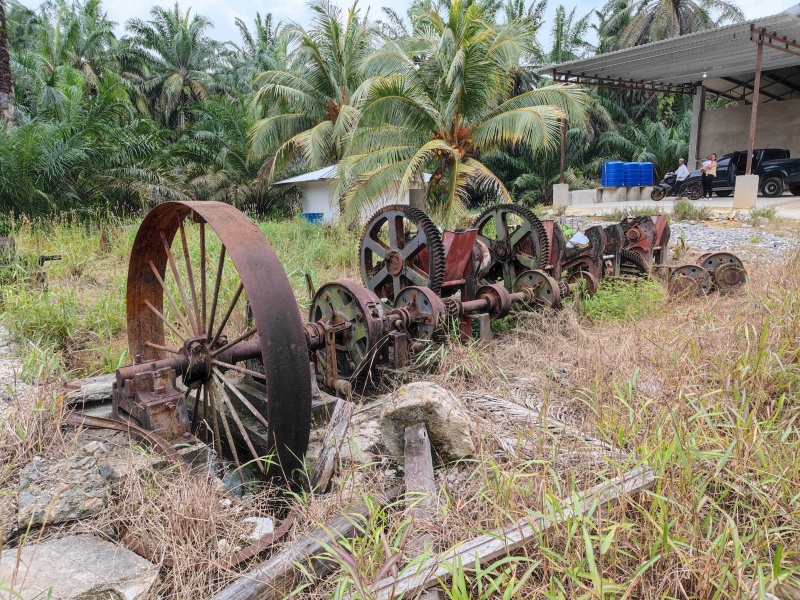 Remnants of the Japanese

History was made in the early 1900s as the Japanese migrated to Kampung Seniawan Jepon, Kota Samarahan for agricultural purposes. After successfully growing cash crops, the enterprise not only left memories, but also vestiges.

Evidence of past Japanese activity

The past is a story that cannot be changed. Hence, it is important that history be preserved so that future generations can understand what happened and why it happened.

Kazue Sakai, president of the Rotary Club Kuching Jaya, believes that history cannot be bought with money. Even if you remake it, it will never be authentic.

So, when she heard about the Japanese settlement in Kota Samarahan, Sarawak, she was surprised that there is still evidence of the past after many decades. Sakai migrated here in the early 1980s and has been a resident ever since.

“I worked in the food and beverage industry. Many patrons have told me about the Japanese findings at their kampung.”

Sakai recalled hearing about Kampung Seniawan Jepon for the first time in the 1980s.

She was filled with pride the first time she saw Japan in Sarawak through the torii gate of the Yorioka shrine. The shrine’s roof was leaking at the time, and the structure was in disrepair.

“Due to commitments, I was unable to pursue restoration. Only in 2019 did I work with Rotary Club Tokyo Haneda, Japan to restore the historical heritage,” she shared.

Prior to that, Sakai revealed that she had asked the villagers for help cleaning up the wild bushes, but she was told that touching the shrine was forbidden.

“They told me they were terrified because they had seen ghosts in the shape of two men walking at night.”

The two ghosts were said to be the Yorioka brothers, who were in charge of the estate in the early 1900s. Many people dared to visit the shrine only after its restoration in 2019.

“The restoration includes removing tree vines, repainting the torii gate, and making the steep hill to the shrine more accessible.”

Sakai talks about the shrine as she shows a photo of the torii gate in Kampung Seniawan Jepon, Kota Samarahan.

Sakai shows a photo of the Yorioka shrine.

One of the man-made ponds that once housed the paddy field.

The Yorioka brothers were invited to explore Sarawak’s jungles in the hopes of developing them for agricultural purposes.

“In 1910, they met in Singapore. Shozo’s abilities were said to have impressed Charles. Shozo also resembled the Japanese version of James Brooke.”

According to Ranee Sylvia, Charles Vyner’s wife, in the book “The Three White Rajah,” Charles did visit Singapore for three months to seek medical attention. Charles became ill after being caught in the rain while fishing one night.

“After becoming ill at the Astana, it was decided that he should be transferred to the Singapore Hospital.”

Charles and Shozo met during that period in the first quarter of 1910. Charles had brought the Japanese with him on his way back to Sarawak.

After much discussion, the White Rajah offered Shozo 1,700 acres of Kota Samarahan land for development.

Shozo returned to the estate in late 1910 with 250 Japanese citizens under his enterprise ‘Nissa Shokai Corporation’ to work at the estate.

He had not only brought in labourers, but also their families, teachers, doctors, and acupuncturists.

Even after 111 years, the Yorioka shrine, though dilapidated, still stands.

Instead of nails, the Yorioka shrine was built using the interlocking method.

An empty storeroom on the plantation grounds that is filled with old stories.

According to Japanese culture, they believed in erecting a shrine to bless their endeavour and protect them.

“So, they brought in Sakura tree wood to build the shrine. Instead of using nails to secure it, they built it using an interlocking method. That is why, after a hundred years, the shrine is still standing,” Sakai said, adding that without proper methods, a piece of history could be lost.

Today, palm oil plantations surround the shrine. However, in the early 1910s, the Japanese worked on developing a rubber estate because there was a global demand for it at the time.

They also planted black pepper and pineapples in addition to their primary focus on rubber.

“Because they needed to survive, they also managed a paddy field nearby as a rice source,” she added.

Although it was an invitation, Shozo’s ambitions in Sarawak could not be fulfilled because he died of malaria in 1912.

Nevertheless, the development was continued by his brother, Yorioka Shosuke, who had the same ambition.

“The rubber plantation prospered. The Nissa Shokai Corporation had made a profit from their enterprise. Then, a percentage of the profit made was distributed to various Japanese companies, including the still-thriving Nippon Steel Corporation and Sapporo Beer,” Sakai revealed.

When the Japanese migrants arrived, they built a water tank. Even though it is no longer in use, the villagers did not demolish it. The enterprise’s logo is visible, albeit faded.

When the Japanese migrants arrived, they built a water tank. Even though it is no longer in use, the villagers did not demolish it. The enterprise’s logo is visible, albeit faded.

A part of a boat used to transport migrants, their materials, and supplies during the migration period.

Remnants of the past

While the enterprise’s success was imminent, Sakai said that it did not last long.

“When the Japanese occupation began, the migrants were told to return to their hometown because it was no longer safe to stay here. Because of the war, the Yorioka estate came to a halt,” shared Sakai.

They had left promptly, leaving behind their work on the land as well as the architecture they had built.

However, the Yorioka Shrine, named after Yorioka Shozo, was not the only structure from the Japanese settlement to survive a century. There were several other vestiges in the vicinity of Kampung Seniawan Jepon.

“There is a tiny standalone room near the plantation site that was used as a storeroom. The sign above the door was written in Japanese characters. After the war, it was covered in cement because the locals were afraid of being associated with the Japanese,” she said.

Visiting the site with the village’s head, KK Hj Anuar bin Unid, he added that the storeroom was also used by Japanese soldiers during the war.

“They had armour and weapons stored there, and it developed into a strong room. It was also said that the tiny windows at the bottom of the room were used to conduct transactions, like a bank,” revealed Anuar.

Not far from that room was a planting machinery that was still in use by the locals until the 1970s.

“The Japanese also constructed a water tank during the settlement period. The logo can still be seen today.

“In the nearby village, Kampung Jaya Ria, the Japanese built 13 man-made ponds.”

According to the Sarawak Gazette, January 4, 1937, under the Nissa Shokai’s paddy planting scheme, the Japanese had over 1,000 acres of paddy plantation.

The name ‘Jepon’ is still used today as a reminder that Samarahan once had a Japanese settlement.

Rail track ruins near the pond. Back then, it was used by the labourers to transport carts from one end of the village to the other.

One of the man-made ponds that once housed the paddy field.

“Yields to date have been satisfactory, and it’s interesting to note that Samarahan padi already commands a higher price in Kuching than native padi.”

Though paddy plantation ceased during the break of the war, the man-made ponds proved useful until the 1980s.

Anuar recalled how, back in the 1970s, the villagers relied on it as their primary source of water.

“The water pipeline was not yet installed at the time. So, the pond water served as our drinking water, cooking water, washing water, and everything else.”

Rail tracks near the ponds were used to transport materials and supplies around the entire village using a pushcart.

“It used to extend all the way to the front of Yorioka shrine, where the plantation was, but it has since been replaced by roads.”

Meanwhile, the remnant of the boat that brought the migrants over can be seen greeting passers-by or visitors to the village at the bridge.

“It used to be a waft before the bridge was built. After transporting people, supplies, or materials, the Japanese would dock their boats there.”

All of these remnants of the past are easy to get rid of. The villagers, on the other hand, saw it as an old story with historical significance that should be preserved.

Beyond the chaos caused by the war were the nice Japanese migrants who had assimilated into local culture while also helping in the development of the village through the techniques, methods, and technology they brought with them.