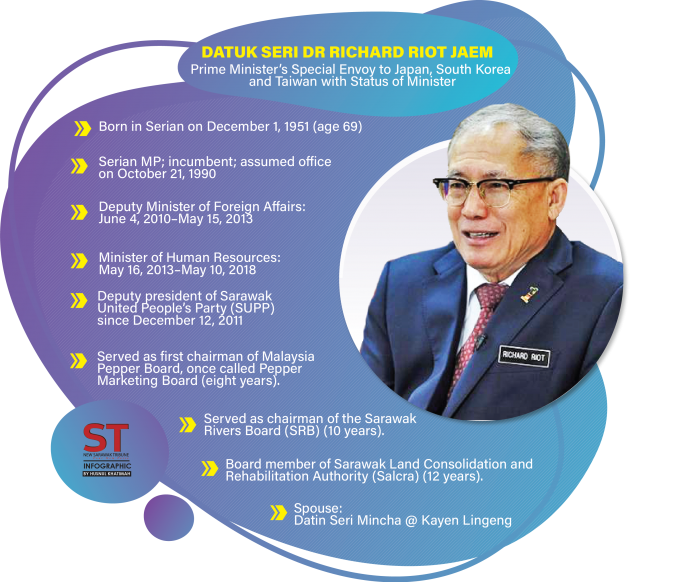 RIOT GETS HIS LETTER

In a communication with the Sarawak Tribune yesterday, Riot said the letter of appointment was personally handed to him by Prime Minister Tan Sri Muhyiddin Yassin at 4.30pm at the Seri Perdana.

In recent days, much speculation, especially in the social media, was made of his appointment as the prime minister’s special envoy to East Asia.

But Riot refused to be drawn to the speculation “not until I have the official document in my hands”.

True to his words, Riot called the Sarawak Tribune minutes after he emerged from that meeting with the prime minister – with the letter in his coat’s pocket.

In the letter Riot is the Prime Minister’s Special Envoy to Japan, Korea and Taiwan with Status of Minister.

According to Riot, a smiling Muhyiddin said: “Congratulations. I am confident you can do it.”

Riot thanked the prime minister for his confidence in him, saying he will deliver in this new appointment given his past experience that includes being a former foreign affairs deputy minister and human resources minister.

“I will work to strengthen trade relations between Malaysia and the three countries,” he said.

The seven-term MP went on to thank Chief Minister Datuk Patinggi Abang Johari Tun Openg and Datuk Seri Dr Sim Kui Hian, the president of his party, Sarawak United People’s Party (SUPP), “without whose blessings this appointment would not have been possible”.

“Personally, as with all my other appointments in the past, I also owe this appointment to the Serian constituents, who have been supportive of me through not one but seven general elections.

“I am very happy, proud and honoured with this appointment. It’s an honour for Sarawak and for the Bidayuh in particular,” he said.