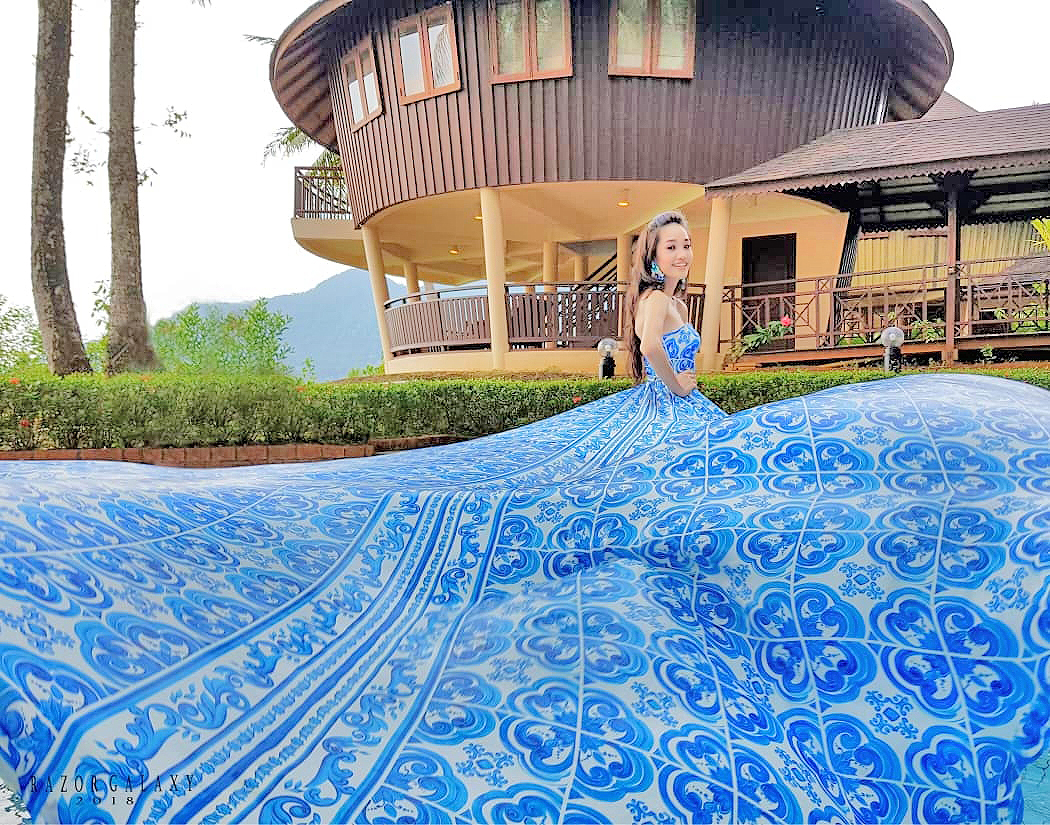 Well loved within the fashion industry for her talent and exuberant personality, Rozie Khan dived into the industry since the year 2000.

Rozie’s main focus whenever she designs are the ones that cover the flaws and enhance the beauty of its wearer.  “Most of my dresses are inspired by my own body posture. When I design, I would imagine myself wearing it”, the Dalat-born Rozie conceded.

Apart from that, she also conducts research on body types when designing for someone to ensure a perfect fit.

Having 19 years of experience in the fashion industry, Rozie can tailor a dress from scratch at an average of one week. “In one day, I work an average of seven hours.

I would start at 5 in the morning, and would take breaks in between before continuing until 6 o’clock in the evening at most”, she said.

However, she emphasised during the interview with New Sarawak Tribune that our eyesight during tailoring is important as working strenuously through long hours can hinder it.

“It is important that our eyes rest well, otherwise we cannot concentrate on our work and would produce poorly,” Rozie elaborated.

The history of Rozie Khan

A village girl from Dalat, Mukah, Sarawak, Rozie did not get the chance to further her studies into the fashion industry as she has nine siblings that her policeman father needed to support.

“My younger siblings needed the money for their studies more than me. But I am not the type to force my parents as I understood their financial situation,” explained Rozie.

Instead, the young lass back then did makeup, another passion of hers.

“I like all things beautiful and it has always been my interest”, she answered when asked why did she decide to do makeup instead.

To add on, her uncle sold makeup while her aunt was into pageantry.

“So I watched them doing makeup and it became something I was used to”, Rozie
did makeup since learning the trade at the age of 11. Back then, she would help apply makeup
for her friends whenever they had dance performances.

Rozie, a mixed-parentage of Melanau, Chinese, Kampar (Indonesia) and Brunei descent has always had art flowing in her veins as her family members
were involved with various types of arts.

What got her into the world of fashion back in 2000 was the woes of how her personal designs were never the same as she wanted when tailors made it. “So I tried doing it myself. Furthermore, back then I was close with
Latip of Latip’s Collection and he shared with me some tailoring basics”.

Familiar with Dato Rizalman’s fashion pieces, Rozie shared another story that led her to work with the man himself till this day. “You know as a teenager, we would look through fashion magazines, and keep a scrapbook of our favourite outfits glued on to it. I glued all of his old designs, and when I finally met him later I showed it to him!”

To gain more experience, Rozie went to Kuala Lumpur in 2007 and had the opportunity to work with different local artistes like Maya Karin and others.

With her experiences in the fashion industry, Rozie advises those who want to embark into the industry to always practice. “Even though I do not have any basic knowledge, but as I work on it, I would realise my mistakes and from there I will improve.”

She also advises to never give up on your passion. “Once you give up, you will never gain anything”.

At the moment, Rozie is paving a new wave of fashion designs into the world of pageantry in Malaysia. Introducing the use of ballgown dresses, and the usage of local fabrics — such as the songket, batik and Pua Kumbu — Rozie hopes that through this, the pageant industry can further introduce our Malaysian culture at the international level.