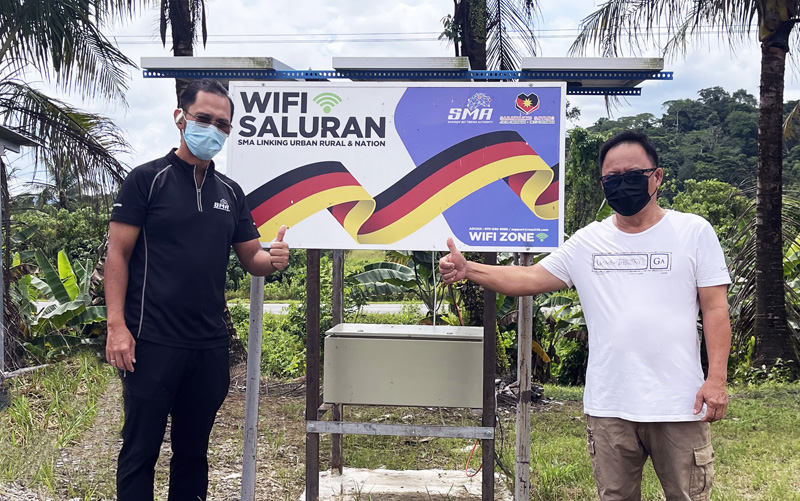 LIMBANG: The Sarawak Linking Urban, Rural and Nation (Saluran) initiative by the state government through the Sarawak Multimedia Authority (SMA) has

Get your vaccine jabs
Kuching still most Covid-19 affected district
Have you had your flu jab?

LIMBANG: The Sarawak Linking Urban, Rural and Nation (Saluran) initiative by the state government through the Sarawak Multimedia Authority (SMA) has benefitted rural dwellers in more ways than one.

For longhouse head Rumpang Bali, he said it enabled rural children to keep up with the home-based learning process throughout the Covid-19 pandemic.

He said it also allowed longhouse dwellers to connect with relatives working or studying away from home.

“I am very grateful that Saluran has been provided for my longhouse. It is very important for all of us because it helps us in connecting with family members.

“When the Covid-19 pandemic first happened, the ability to connect with our loved ones who are far away provided a great sense of relief as we were able to stay in touch and check on each other,” he said.

He said this when met during a visit by SMA general manager Dr Zaidi Razak to Rh Rumpang in in Kampung Mersang Darat here on Sunday (Nov 28).

Rumpang said the longhouse consists of 23 doors and 195 residents with 60 per cent being children as well as teenagers.

“I would like to thank our Chief Minister Datuk Patinggi Tan Sri Abang Johari Tun Openg for putting tremendous efforts in various initiatives to ensure that local communities like us are not being left behind in this era of digitalisation,” he said.

“We want to make sure that local communities in Sarawak are given equal access to benefit from digital infrastructures and connectivity that the state government has invested in,” he said.

Proposal to lower voting age for next parliament meeting