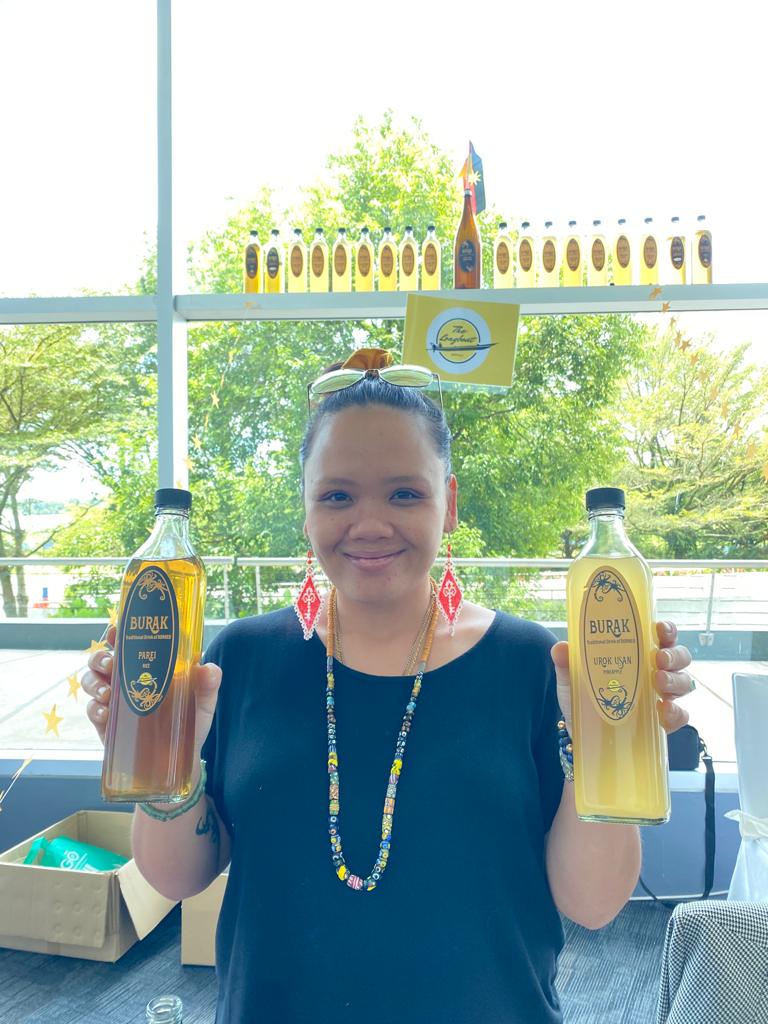 It was held in Kuching for the first time from September 20 to September 23 with an expected attendance of over 700 Tafi members from India.

There were 108 sellers from all over Malaysia who participated in attracting potential new clients among more than 450 buyers from India representing more than 240 companies.

After the convention, New Sarawak Tribune met with the exhibitioners to hear responses on the convention and their journey of entrepreneurship.

A TUAK STORY, AT THE BURAK BAR

Helong Ajang, owns a Bistro and Burak Bar in Bintulu, ‘The Longboat Bintulu’, which is the first ever Burak Bar ever.
She explained that her bar makes, tries the tuak and finds the best burak in town, thereby having people to put it at her bistro and bar with opportunities for people to have them and buy them.

“We sell tuak which is known by the Orang Ulus as burak but our main purpose is to showcase what it is supposed to taste like.
“For the convention, the sale has been satisfying, the Indian visitors seem to be very happy to drink our burak,” she enthused.

The burak bar enters its fifth year of operation but she added that the burak industry has been a popular drink among Sarawakians and its historical produce has been going around for 50 years.

“It has been passed down after many generations,” she said.

She elaborated further, her most popular ‘burak’ is the pineapple flavour, and that at her bar and bistro they have made a few varieties of the ‘burak’.

“I have a classic one, but the pineapple flavour seems to be a favourite choice of the Indian visitors at the convention,” she revealed.

When asked whether there will be more appearance of the ‘burak bar’ at future conventions, conferences or events
she enthused and replied, “When there is a calling, I will be there.”

Two friends, an interest for music and sape

Hayree Hashim and Frederick Maldine, has a knack for music and the beautiful instrument of ‘sape’.

Hayree has been making sape for ten years; he also plays the instrument but only as a personal hobby and not for performances at events or functions.

“I started ten years ago to make the ‘sape’. There were not many young sape makers at the time when I first started.

“I was inspired by the opportunity to make one so that there are more sape players playing the instrument.

He added that sape making is a full time job and that the visitors at the convention were very keen and interested to know more about the instrument.

“They asked a lot of questions about ‘Sape’ and it has been a very good way to promote the instrument to them (Indian visitors),” he said.

He also hopes that there are will be a lot young sape makers and further hopes that the interest of playing sape gets better every day.

Hayree’s friend, Frederick, is also a sape player. He was asked by Hayree to display his art paintings at the convention.

“I just finished my degree, and I was invited by Hayree to open up a booth.

“I play the ‘sape’ as well and teach ‘sape’ but I started painting last month.

“It was more of a hobby but my priority is still music.

“My interest with music began when I started playing the guitar for church and slowly that interest of music kicked in and it continued from there,” he added.

Frederick has been playing the ‘sape’ since 2016 and has been interested in sape making and has learned making them from his friend, Hayree.

“I am also interested in the designs constructed on the ‘sape’. I was inspired by my mentor, Dennis Ngau Wan,” he explained.

He later revealed that the paintings painted by his mentor were displayed at the booth at the convention.

“In general, I have always been interested in ‘sape’ since I was ten years old,” he pointed out when meeting with New Sarawak Tribune.