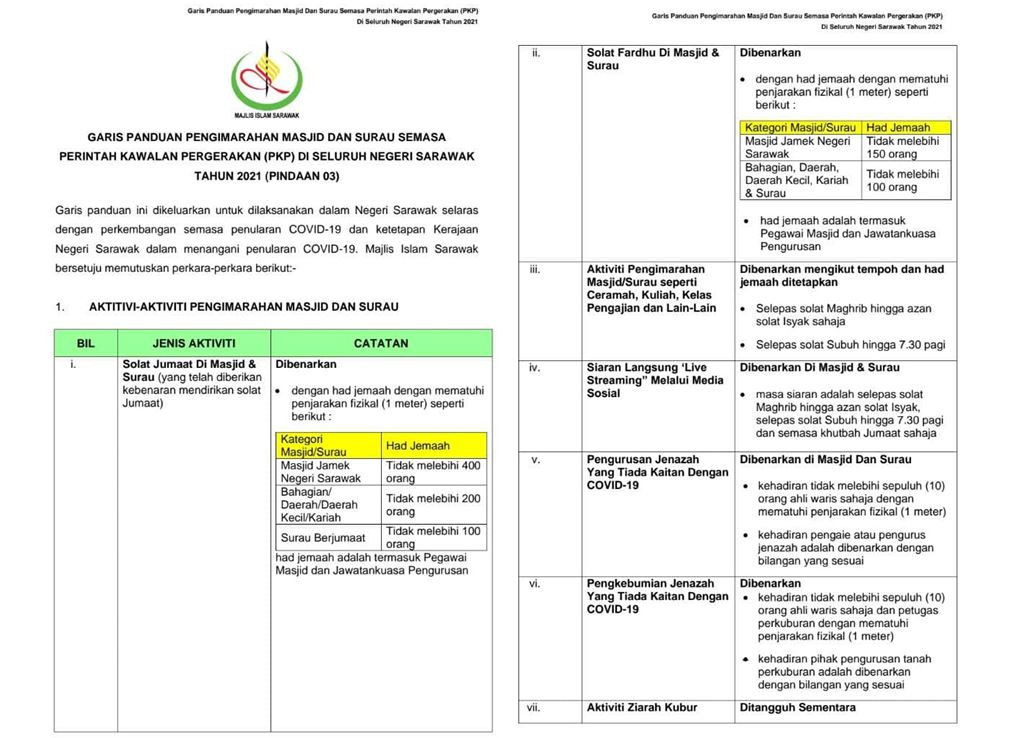 Fardhu prayers at mosques and surau are limited to 150 people for Masjid Jamek while for mosques in districts, this is limited to 100 people, including a mosque officer and the management committee members, all practising physical distancing.

For Friday prayers, in Masjid Jamek, 400 people are allowed while in district mosques and surau, it will be limited to 200 people while for surau, it is limited to 100 people, including a mosque officer and the management committee members.

Handling of the body of deceased, management and burial of non-Covid-19 patients are allowed, as long as not more than 10 heirs are present.

Meanwhile, live streaming of activities or events on social media at mosques and surau are allowed for Maghrib until Isyak while for the Subuh prayer, this will be allowed until 7.30am only. Friday sermons (khutbah) are also allowed only during Friday prayers.

Gatherings for religious talks, teaching and classes, studies and others, at mosques and surau are only allowed after Maghrib until Isyak only while after the Subuh prayer, this is allowed until 7.40am.

MIS advised mosque officers and the management committee to comply with SOPs by wearing a face mask at all times, taking body temperature, and register using the MySejahtera app before entering mosques and surau.

The public also need to bring their own prayer mat, perform wudhu (ablution) at home and no shaking of hands. The opening of mosques or surau will be 30 minutes before azan.

The use of loudspeakers during the period will only be for azan, and Al-Quran readings 30 minutes before azan, sermon (khutbah), and important announcements.

The guidelines are effective July 7 until the end of the MCO or any other directives set by MIS.

MIS can change or amend the guidelines from time to time based on need.