AirAsia shows off Sarawak to the world

KUCHING: Five AirAsia aircrafts are carrying advertisements featuring Sarawak graphics/visuals on their overhead cabin compartments and meal trays to show off Sarawak to the world in line with the Sarawak Tourism Board’s Visit Sarawak Campaign (VSC).

There are 10 different visuals per aircraft. The aircraft involved are three AirAsia Malaysia Airbus 320 and two AirAsia Thailand Airbus 320.

The advertisements will stay on for one year beginning last June 21 on AirAsia Malaysia aircrafts and from July 5 onwards for AirAsia Thailand flights. 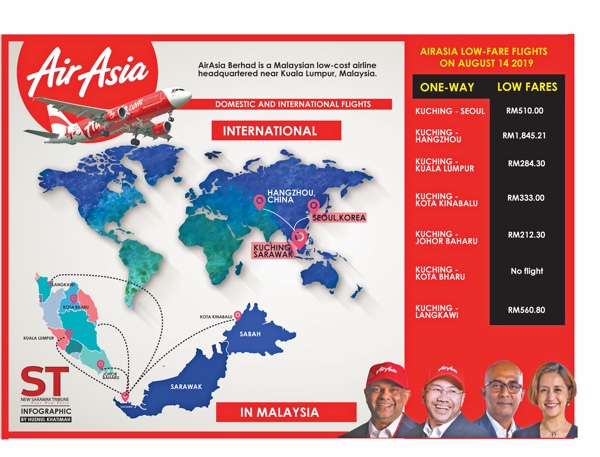 “This advertising initiative will benefit us from the airport stops,” he said during the unveiling of the latest VSC 2019 advertising on AirAsia at Kuching International Airport (KIA) yesterday.

He said the five aircrafts will fly to destinations in all Asean countries such as Kuala Lumpur, Johor Bahru, Penang, Singapore, Guang Zhou, Shen Zhen, Cheng Du, Bangkok, Phuket, giving visibility and exposure through 100 advertisement displays within the aircraft.

TYT: See the good in each other

Discussions for Unifor HQ after CNY