KUCHING: Sarawak ranks top in the country with more than 55 percent of its adult population having been fully vaccinated against Covid-19 as of July 25.

“In fact, Malaysia has also managed to record the highest number of daily vaccinations on July 22, which is 507,000 doses.

“This is clearly observed in the Sarawak which as of July 25 has successfully given complete vaccination to 55 percent of its adult population,” he said in response to a question raised by Jelebu MP Datuk Jalaluddin Alias in the Dewan Rakyat on Monday.

Tengku Zafrul, who is Finance Minister, said the emphasis was on vaccinating the people which indirectly helped to reduce symptomatic cases, and eased pressure on the capacity of public hospitals.

On public health capacity, the minister said it was almost 100 percent in Sarawak in early June but it had now dropped to 33 percent.

“What is significant in Sarawak now is that of the number of cases exceeding 300 a day, less than 10 or three percent involve symptomatic cases in categories four and five,” he said. 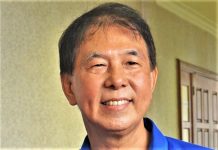 State polls not that urgent