KUCHING: The Gabungan Parti Sarawak (GPS) government will reject any elements that could divide the unity of the people in the state.

“We are very fortunate that the state’s immigration autonomy protects our society from extremist elements and religious extremists from outside.

“This is the autonomous power that must continue to be defended in order to preserve the wellbeing of Bumi Kenyalang.

“Once again, I would like to state that ‘Your religion is your religion; my religion is my religion. Whatever you believe or do is between you and God’,” he said at a state banquet in conjunction with the 85th birthday celebration of Head of State Tun Pehin Sri Abdul Taib Mahmud at Borneo Convention Centre Kuching (BCCK).

“Nothing is more valuable than the unity of our multi-racial and multi-religious society in our joint efforts to pursue the dream of becoming a prosperous society and state.

“No matter how much wealth there is, if our state is not safe and stable, all that wealth will not be able to be cultivated to prosper our state.

“Look at what is happening in Afghanistan. The chaotic atmosphere in the country has given way to the entry of foreign powers and the economy is left idle,” he stressed.

Abang Johari thus hoped that Sarawak would continue to be safe from such external as well as internal threats to the unity of its people.

“In this era of Internet and technology, our society is presented with so many elements that can be the starting point of social alienation, particularly in terms of religion.

“Thus, I called upon everyone to be more careful in assessing the authenticity and truthfulness of information received or shared,” he said.

The chief minister also mentioned that apart from the efforts through Unit for Other Religions (Unifor), he strongly supported the efforts of non-governmental organisations such as the Sarawak Unity Foundation which strive to enhance unity among the people in Sarawak, especially among the youth. 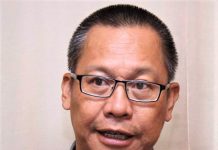