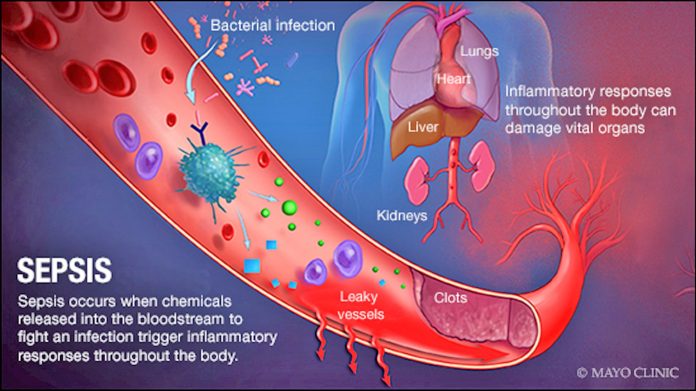 PARIS: Sepsis played a direct role in the deaths of 11 million people in 2017, almost twice as many as previously estimated, according to a study published Thursday.

That represents one death for every five cases of the condition, and one-in-five deaths from all causes worldwide, researchers reported in The Lancet medical journal.

Sepsis occurs when a person’s organs cease to function properly as the result of an out-of-control immune response to infection.

Even if the condition doesn’t kill, it can create lifelong disabilities.

Some 85 percent of cases in 2017 were in low- or middle income countries, with the highest burden in sub-Saharan Africa, the South Pacific, and Asia.

Hardest hit were children under five years old, who accounted for more than 40 percent of all cases.

“We are alarmed to find sepsis deaths are much higher than previously estimated, especially as the condition is both preventable and treatable,” said senior author Mohsen Naghavi, a professor at the Institute for Health Metrics and Evaluation in Washington state.

In the United States, sepsis is the most common cause of in-hospital deaths, and costs more than $24 billion each year.

As a result, cases outside a hospital setting — notably in lowerincome countries — were overlooked, the authors said.

To generate a more accurate figure, Naghavi and colleagues drew from the comprehensive Global Burden of Disease Study, which tracks 282 different primary causes of death.

Sepsis — not among them — is described as a so-called “intermediate” cause of death provoked by diseases such as cancer, pneumonia or diabetes.

The most common underlying cause has consistently been lower respiratory infection. – AFP