KUCHING: The Transport Ministry and the relevant agencies must answer for the cancellation of 12 flights due to runway light failures, affecting more than 1,500 passengers this week. Progressive Democratic Party (PDP) president Datuk Seri Tiong King Sing (pic) said it was a clear case of mismanagement of the Sibu Airport and demanded that Transport Minister Anthony Loke Siew Fook be held responsible. He said the ministry and its subordinates had grossly allowed the problem to occur. 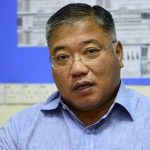 “This latest debacle at the Sibu Airport on Tuesday is symptomatic of a broader pattern of mismanagement across airports in East Malaysia where facilities and maintenance have been severely lacklustre, making passengers suffer even though they have paid for the services in the form of the Passenger Service Charge (PSC). “Along with Loke, the Malaysian Aviation Commission (Mavcom), Malaysia Airports Holdings Berhad (MAHB) and the Sibu Airport management must all answer for this latest debacle,” he said.

Tiong, who is also Bintulu MP, said the incident could have been avoided if regular maintenance and inspections had been duly carried out. He pointed to the poor handling of the situation by the airport authority, saying, “Not even consolation bottled mineral water was given to the affected passengers. Instead the airport was closed and the passengers effectively expelled. “There appears to be no crisis management in place. The public relations staff seemed to be sleeping on the job.

“The airport’s management should have provided assistance to the affected passengers, including arranging for accommodation and meals if necessary rather than rushing the passengers away as if they were the source of the problem.” Tiong also questioned the attitude of Mavcom, saying all it cares about was collecting the Passenger Service Charge from passengers but once airport users faced problems, Mavcom officials were nowhere to be seen. According to Tiong, he has repeatedly brought up the problem of inadequate infrastructure and facility maintenance at East Malaysia airports, in Parliament.