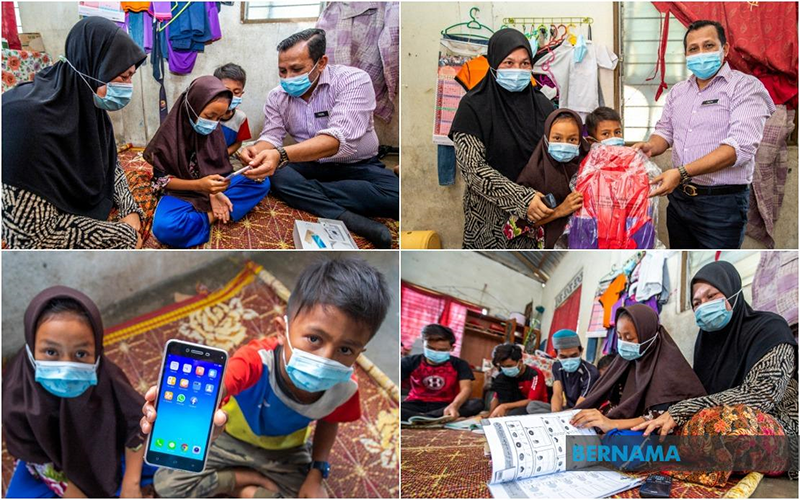 KOTA BHARU: Not wanting poor students to continue to be left out of home-based teaching and learning (PdPR) online, drove Sekolah Kebangsaan (SK) Che Deris, here to launch an initiative to provide needy pupils with smartphones.

SK Che Deris headmaster Mohammad Fadzil Mat Il (il) said almost 30 per cent of the students in the school are from poor families who could not afford smartphones to follow online classes under PdPR.

“So far, the school was able to identify the pupils who could not afford to own smartphone for PdPR which began last week.

“Those from poor families are living in a fishing village as the income of their parents were affected by the Covid-19 pandemic,” he said when met by reporters at Kampung Tanjong Baru, Badang near here today.

Earlier, Mohammad Fadzil visited the house of his pupils, Muhammad Alif Irfan Yaso’, 9, and Fatin Nur Aimi Shahira, 8, to hand over a smartphone for the two siblings to follow lessons under PdPR.

Commenting further, the school is currently in the process of raising funds from the Parent-Teacher Association (PIBG), non-governmental organisations (NGOs) and also private individuals to provide smartphones including data plans to students in need.

“We expect the problem faced by students who cannot afford to own a smartphone to follow PdPR online to be resolved within two weeks under the initiative.

Meanwhile, Rosnani Ibrahim, 43, said before this her two children, Muhammad Alif and Fatin Nur Aimi Shahira, could not follow PdPR like their friends because they did not have a smartphone.

She said, she only used a regular phone which does not have data plan apart from not having WhatsApp and Telegram applications for her son’s PdPR online classes.

“I am grateful and thankful for the smartphone contribution given by the school. I cannot afford to buy a new smartphone as I am only working as a school cleaner with an income of around RM1,200 a month.

“In fact, I also have four other children who are still in school and at the university level besides my husband Yaso ‘Ghani, 47, is also unable to work due to haemorrhoids almost five years ago,” said Rosnani who also received a monthly assistance of RM450 from the Social Welfare Department. – Bernama

Do not politicise emergency proclamation