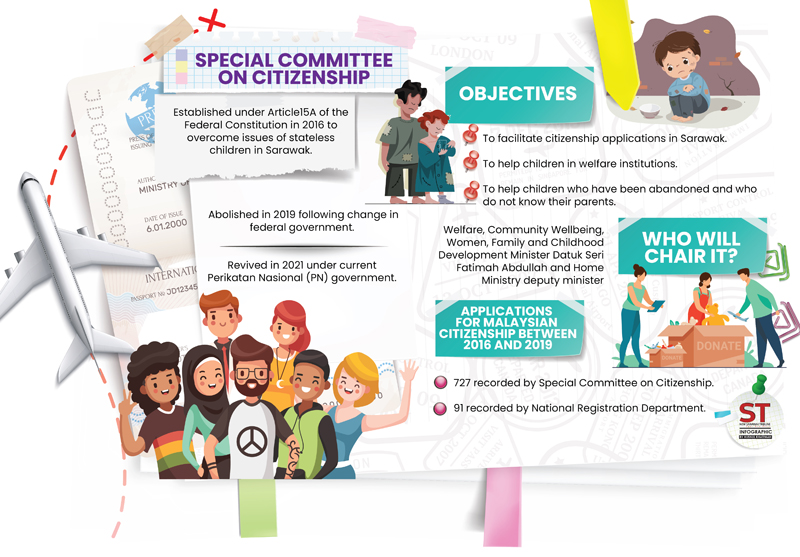 KUCHING: The Special Committee on Citizenship (SCC) established under Article 15A of the Federal Constitution has been revived to facilitate citizenship applications in Sarawak.

“The special committee was established in 2016 to overcome the issues of stateless children in Sarawak.

“However, the special committee was abolished in 2019 following a change in the federal government. Under the current Perikatan Nasional (PN) government, we have written officially to have it revived and I just received information on its approval by the Home Ministry this week.

“The revival will see changes in terms of its members. It will be chaired by myself and the Home Ministry deputy minister. I think this will be very good and we will be able to speed up the process,” she said here today.

Fatimah pointed out that the special committee would provide intensive assistance to ensure that the applications submitted were in order for greater chances of getting approval.

“Before this, the application would go straight to Putrajaya and it does not go through the National Registration Department (JPN) like what most people think. The special committee will meet every month and look at the applications to make sure that all the necessary documents are provided for.

“An application would not be approved if the documentation is not complete. This is one of the ways in which we will facilitate. We will also look into what are causing the children to be stateless, we will go back to the applicants and inform on the matters that need to be sorted out.

“Speed is of utmost importance as the more you delay in approving or disapproving of the application, the child is growing older by the day. The problems faced by the child will not be decreasing but becoming more and more instead,” she said.

Fatimah added that the ministry would look into a catch-up plan on previous applications that were submitted to the Home Ministry.

She also revealed that between 2016 and 2019, the SCC recorded 727 applications for Malaysian citizenship with 91 applications recorded by the JPN.

“The special committee will also help the children who are under the welfare institutions, those who have been abandoned and who do not know their parents which make their status in documentation as undetermined,” she said.