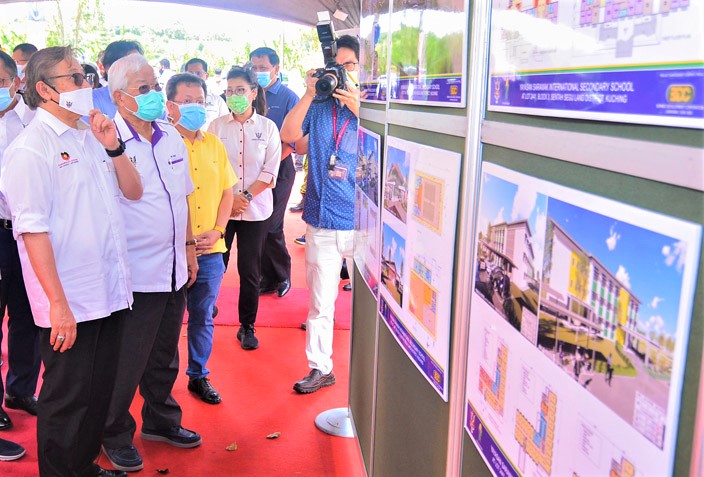 State government to pay all costs and fees

KUCHING: The state government will bear the high operating cost and fees at Yayasan Sarawak international secondary schools in order to provide opportunities for students from low income families to obtain excellent and competitive education.

He said these schools would train Sarawakians to be on the same level with the international community, especially in sectors relevant to the current age such as technology.

“However, the fees are high, meaning our rural children who have good results are unable to be in this competitive environment,” he said when officiating at the earth-breaking ceremony of Yayasan Sarawak International Secondary School (the first of the five state-owned international secondary schools) at Mile 12, Jalan Kuching-Serian today.

He emphasised the importance of grouping excellent and talented students together, thereby placing them in a competitive environment and encouraging them to improve.

Abang Johari said that Sarawak was rich in resources but was somewhat lacking in people of calibre to manage them.

The use of English as the medium of instruction at these international schools would also boost graduates’ command of the language, thus improving their employment prospects.

The chief minister said that an issue faced in Sarawak was that even though the state had talented graduates, some were not competent in English, which is globally used. He said this caused them to be less employable.

“Big companies require employees who have the command of language, especially the language which is widely used by people around the world, because our economy is a global one,” he explained.

“This is why we have a rather paradoxical situation. We have talented people who have graduated from universities but they cannot be employed just because they do not have the command of the language,” he said, adding that English was the language of technology as well.

Abang Johari also said that eligible Sarawakian students regardless of race will be able to enrol in the international schools.

During the ceremony, he also witnessed the handover of Science, Technology, Engineering, and Mathematics (STEM) resource materials by Education, Science and Technological Research Minister Datuk Seri Michael Manyin Jawong to the state Education Department director Abang Mat Ali Abang Masagus. The materials will be distributed to primary schools throughout the state.