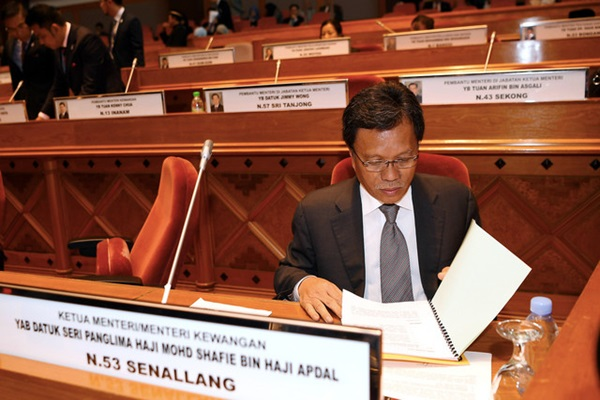 KOTA KINABALU: The Sabah chief minister has dismissed allegations  that the state government issued identity cards to illegal immigrants, saying only a federal government agency is empowered to issue such documents.

“We (Sabah government) do not issue identity cards and allegations that we gave identity cards to illegal immigrants are not true,” Datuk Seri Mohd Shafie Apdal told the Sabah Legislative Assembly here today.

Shafie Apdal studies some documents before the start of the second term of the Sabah State Assembly. File Photo: Bernama

He was answering a supplementary question from Datuk Joniston Bangkuai (PBS-Kiulu) on developments regarding the state’s security situation.

Mohd Shafie, the state assemblyman for Senallang, said the state government has taken firm measures to tackle the issue of illegal immigrants, including deporting those arrested by the security forces.

Foreigners caught without identification documents are sent back to their countries of origin and not held too long at the temporary detention centres although it cost the government a lot to tackle the illegal immigrant problem, he added.

Filipinos and Indonesians who are needed to work in the agriculture and construction sectors would be given work permits.

Earlier, answering a question from Datuk Jeffrey G. Kitingan (STAR-Tambunan) on Sabah’s security following the arrest of 12 foreigners and a local for suspected involvement with terror groups, Mohd Shafie said the situation is under control.

He said the security authorities regularly conduct operations to root out militant elements.

Any development on security in the southern Philippines would have an impact on Sabah as it could result in people there fleeing to Sabah, he said.

However, the Eastern Sabah Security Command (ESSCom) has been conducting operations to prevent the entry of militants, he said.

Malaysia also exchanged information with the Philippines and Indonesia and conducted joint sea patrols in their common border areas, he said. – Bernama