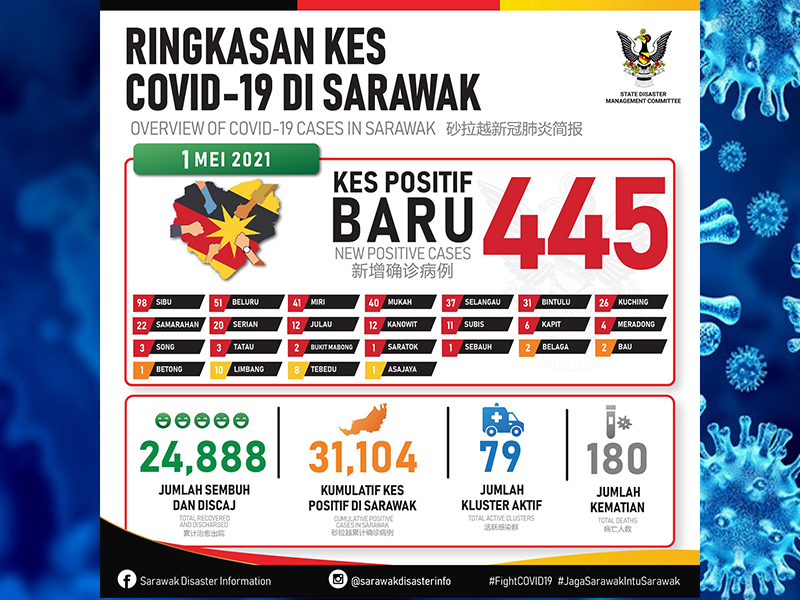 The Sarawak Disaster Management Committee (SDMC) said the 181st death was Case 30,157, a local woman aged 82 years who was found unconscious by family members on Apr 25 and was then brought to Mukah Hospital.

“She had experienced symptoms of cough and loss of appetite for three days and began to experience breathing difficulty thereafter.

“She was pronounced dead on the same day (Apr 25). Further investigation by the Forensic Department confirmed that her death was due to Covid-19 and reverse transcription polymerase chain reaction (rT-PCR) test was done and she was found positive for Covid-19 on Apr 29,” it said in a statement today (May 2).

The case had comorbidities of high blood pressure and diabetes. The deceased was also said to be linked to the Nirai River cluster in Selangau district.

The 182nd death was Case 30,982, involving a local woman aged 88 years who had received treatment at Sibu Hospital as she was experiencing breathing difficulty.

The case had symptoms of vomiting and lethargy a few days ago. Her health condition deteriorated and was announced dead on May 1.

The committee extends its condolences to the family of the victims.