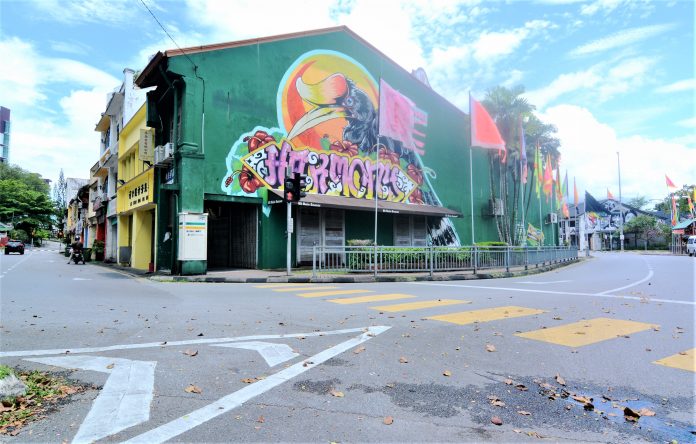 Let’s be honest — after Prime Minister Tan Sri Muhyiddin Yassin announced the commencement of the movement control order (MCO) on March 18 due to the spike of Covid-19 cases, the next thought that comes into mind would be what you should do for the next four weeks.

Be a responsible citizen

To be frank, when the announcement of the movement control order (MCO) was made, all I thought about was how difficult it would be to get my food supply and other necessities. But soon after, I concluded that this is the perfect time for me to shed some weight. However, it has been almost two weeks, and I am still not losing any, but rather gained even more since I lack the exercise that I usually do while out working or simply walking in shopping malls.

All cooped up with a large supply of (junk)food, I was left with not much choice but to enjoy the placid details that life has offered after the MCO. Coincidentally, I was on my one week leave and was left with nothing to do during this period.

So I ate multiple times a day, binge watch dramas on Netflix, scrolled through my social media accounts — to which I realised was the epitome to my weight gaining experience during the MCO. Almost every posts on them was about the sugary, sweet dalgona coffee and mouth-watering home-cooked meals. Suddenly, my friends on social media became sous chefs with countless new recipes everyday.

Well, I guess the thought of losing weight goes out the window for as long as the MCO. As they say, the idle mind is the devil’s playground — temptations after temptations kept luring me to munch away, and I just cannot resist any of it.

But on the bright side, I am staying at home and away from open spaces. I am in fact, a responsible Malaysian citizen by doing so — while munching over a bag of chips and a bar of chocolate after my homemade bak kut teh lunch.

My food adventures aside, I managed to get in touch with a few people online who volunteered to share their thoughts with readers of the New Sarawak Tribune.

Ever since the announcement of MCO, 28-year-old Jason Pui has been going through social media, Youtube educational content, news, contacting with friends and playing random mobile or computer games on repeat. Other than that, Jason also spends his time doing house chores, cooking and drinking coffee.

To the outgoing Jason, he feels fine staying at home but he is worried of what is happening outside of his circle, “It is like my mind won’t believe until my body is somehow involved. Which it is in a micro way.” His other worries is how his future will turn out after all this is over.

Jason, however, did not have a problem going through with the order, “In my opinion, it’s part of the strategy to break the chain, how we can survive as a species and as a society.”

What Jason normally does when starting his list is to start with the needs, and then gradually move over to the wants. “You can get some cleaning done, one that you never usually have the time for, or simply catch up on a TV series or learn some new skills.”

Apart from that, Jason also keeps up with the news to ensure that he gets the important information. “Keep in mind that you’re staying indoors as part of a bigger effort to stop the spread of a deadly virus. So it is a good time to reflect on what you can do to make tomorrow better.”

Meanwhile, 32-year-old Ryan Chung Han advises people to try and cope staying at home by any means necessary, “The MCO is for your own good, you do not want to see friends or families infected by Covid-19. Like in my case, I went to the same church as Pastor Cheng (Malaysia’s first Covid-19 fatality). He is like family to me, and his passing really broke my heart.”

Being a responsible Malaysian, he urges the public to listen to the government’s instructions as it is meant to break the chain of the virus. “We should give our full cooperation and support.”

Having mixed feelings regarding the whole Covid-19 situation, Ryan feels that the situation is scary but with 28 days under the MCO, the yo-yo player feels that there is no need to panic, but at the same time, we should always be extra cautious.

Nevertheless, he said that this is a good chance for those who are always sleep-deprived, to catch up on sleep. “It is also an opportunity to hone that cooking skill or whatever it is that you want to practice.”

According to Ryan, he spends his time working from home. “Other than that, the MCO provided me with ample time to do some house cleaning. When I am free, I would practice on my yo-yo as usual.”

Asked whether he minds going through another restriction order, he said it is hard to say as the MCO affects his emcee and yo-yo job. “There are no events now, and most of my bookings have been postponed. To be honest, it is tough for me but I pray that this period will be over soon and everything can be back to normal.”

One thing for sure, once this is over, Ryan wants to meet up with his godmother’s family and his yo-yo team ‘Yo-Blitz’. “Most importantly, I want to eat laksa again. This got me so crazy just thinking about it.”

As for Syazwana Nazlin Che Ramli, 29, the one thing she misses the most is hanging out with friends. “As soon as this order is over, I will call for a hangout session with my friends. But of course, we will be sitting six feet apart from each other,” she laughed.

Throughout the days she has been at home, Syazwana has been focusing on clearing up and organising her unwanted belongings to be donated to charity. “I also spent my time researching on personal projects and finally, giving myself a well-deserved self-TLC (tender, loving, care) both mentally and physically.”

Syazwana initially finds the order to be inconvenient as she fears that the whole city was going to be shut down. “However, I understood that it was a necessary call by the government, and it was the right thing to do.”
She disclosed that she would not mind going through another MCO, “But with an exception that it does not last for months. I do agree that the world needs a rest, but like it or not, it does not run by itself considering our current advancements.”

She lamented that the economy was hit badly due to Covid-19. “Hence with a longer MCO, that would mean that every single thing had to be put on hold.”
Optimistic, Syazwana is grateful that she lives in a time where everything is at the tip of our finger, including video calls with friends, as well as the ability to entertain ourselves with numerous shows to catch up.

“Keep yourself sane! And focus on the silver linings,” she said. “However, you should always prepare yourself for the worse. I know it can be hard to continue to stay indoors, but keep in mind all of those who have passed because of this virus and realise that we as a society have a big responsibility to change the outcome of this situation,” advised Syazwana.

Meanwhile, 29-year-old Terence Aaron Anthony said that the MCO serves as a time to appreciate the details. “I guess this is the time for us to appreciate the details of the things that we read, listen to or watch (books, music, movies etc.) instead of just mindlessly going through them. It will give us a whole new appreciation. With so much time on our hands, now is also the chance for us to pick up new challenging materials.”

In his second time being in ‘lockdown’, Terence previously worked in Beijing, China during the outbreak, and had to go through a similar situation earlier this year. With shops closed due to fears, and the cities becoming ghost towns, he disclosed that coming back to Malaysia and experiencing another partial lockdown brings back memories from Beijing.

But now he knows what to focus on as he spent his days collecting records and listening to a wide array of music. “I’ve gained quite a bit of knowledge on music!”

Terence also had the privilege of working from home. “I’m based in Beijing so I’ve been working remotely since Chinese New Year. But my workload is very minimal at this point.”

Sharing on his experiences, Terence said he felt like a teenager again. “I spent so much time in my bedroom as I am not allowed to leave the house.”
Needless to say, the first thing he looks forward to after this is over, is to give hugs to his family and friends.

An inside look into egg production

Living under an enhanced MCO

A gift from above

Traditional dhobi trade being wrung out

GPS’ ‘Sarawak first’ says it all

The MCO: A Blessing in Disguise

The new morn; the new norm