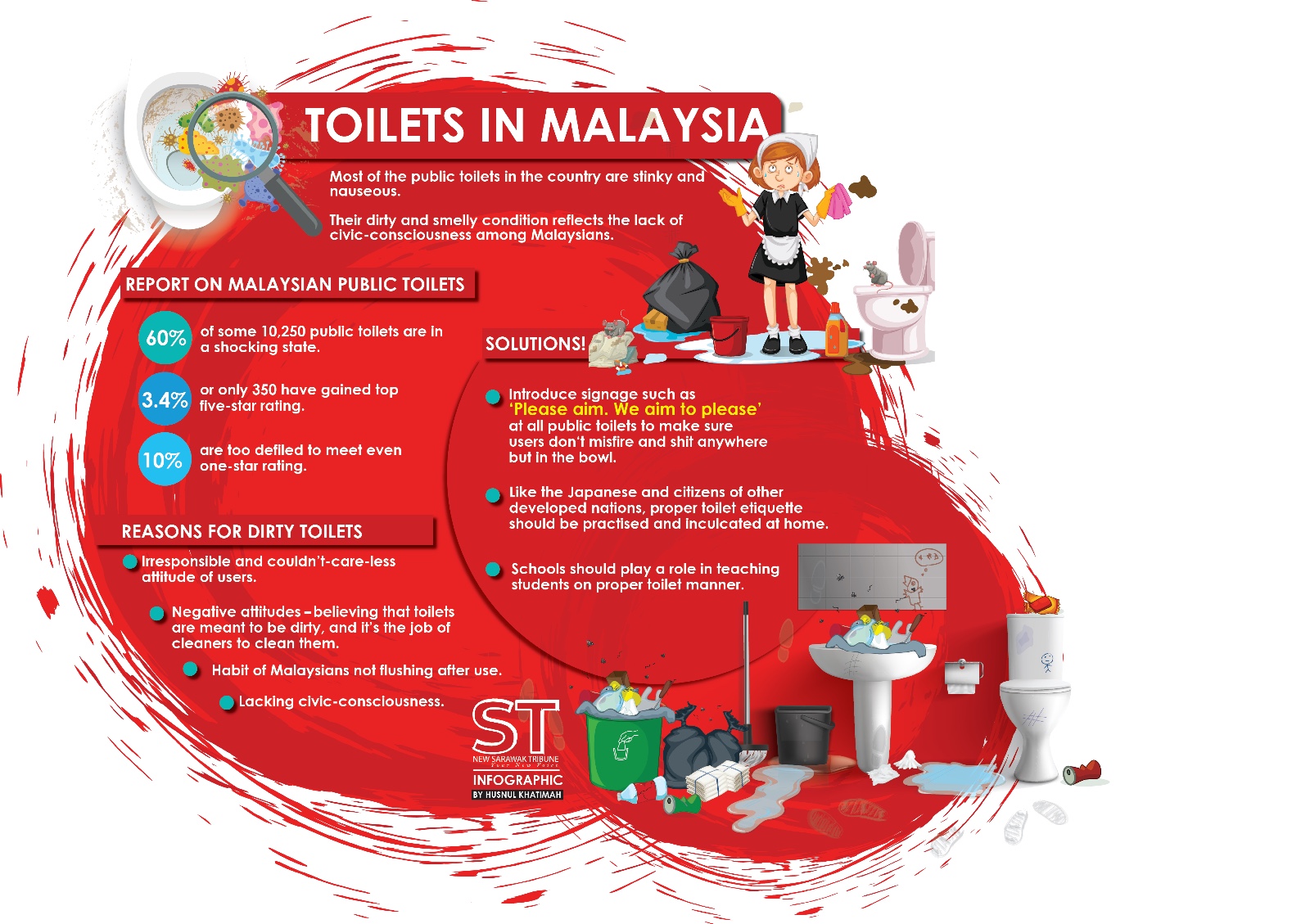 Visit any public toilet in Malaysia and most likely you’d find that it is not only stinky but also nauseating. Prime Minister Tun Dr Mahathir Mohamad admitted last Tuesday that he was embarrassed by the dirty and smelly public toilets in the country as they reflect the lack of civic-mindedness of Malaysians.

Masing feels Malaysians need clear and loud reminders. He even suggested a novel way to get people to get it right when using a toilet. He suggested that a signage like “Please aim. We aim to please” be placed in all public toilets so that Malaysians don’t shoot and shit anywhere else but in the bowl.

Dr Mahathir’s statement, on the other hand, was not an exaggeration. In fact, most Malaysians would concur with him on the state and condition of our public toilets. Their level of cleanliness is yet to be at the desired level judging from the nasty comments and harrowing experiences we frequently have when we answer the call of nature. A few years ago it was reported that about 60 percent of some 10,250 public toilets in Malaysia were a disgrace. It was even reported that only a mere 350 or 3.4 percent achieved the top five-star rating while 1,086 or 10 percent were too defiled to earn even the one-star rating.

“I am very embarrassed. I often inspect toilets in Malaysia to see whether they are clean. Usually, they are not. This reflects our attitude. We should be ashamed but we think no one will know who was responsible,” the prime minister said.

To prove whether his observation is correct or not, just visit any public toilet in the country. Most of them are dirty and foul-smelling. Tourists are appalled by them including those in retail shops and various types of eateries. This contrasts greatly with toilets in developed countries whose toilets, such as those in Japan and South Korea, are well-maintained and kept spotlessly clean to ensure the utmost comfort for toilet users.

As a traveller who has visited Japan and loves the country, I found that most tourist spots there have public toilets. Like Dr Mahathir I was really impressed by the extremely clean facilities. No wonder Japan is well-known for its highly functional toilets with their built-in bidets. “The newest models not only clean your posterior, they also clean the toilet bowls by such means as a special ceramic product and water,” said a source.

Whenever you land at an airport, the first place you normally visit is a toilet. It more or less gives you an impression of the rest of the country. But how are the toilets at our airports?

Compare toilets at Sukarno-Hatta Airport in Jakarta with toilets at KLIA and KLIA2. Two weeks ago I again visited Jakarta. Besides the friendliness of Indonesians, what impressed me was how cleaners at the airport treated the toilet users and also the cleanliness of the toilets. I entered a toilet at the airport and was greeted enthusiastically, and seeing that I wanted to use the toilet, the cleaner quickly re-cleaned the bowl and even sprayed it. I was greatly amazed and impressed. Why would I not be?

Other countries such as France, United Kingdom, United States, Switzerland, and Germany all have clean toilets and some people claimed that you can even sleep in them. I won’t sleep in any toilet no matter how clean (my bed being more comfortable and cleaner), but why is our public toilets so dirty, smelly and mostly in deplorable condition? What’s wrong with us Malaysians? Are we really irresponsible when it comes to toilets as Dr Mahathir thinks we are?

Most Malaysians seem to have the attitude that it’s their business to answer the call of nature in public toilets but not their business or responsibility to ensure their cleanliness. To some a toilet by any other name is just a toilet although it may have a restroom or bathroom attached to it. To weirdoes, it’s a place to deface. To them, toilets are meant to be dirty, so why bother to clean them or keep them clean? It’s this negative attitude that perpetuates the unpleasant condition of Malaysian public toilets.

How irresponsible and unbecoming to have people with such manners and attitude despite the fact that some are very highly educated. Personally, one cannot claim to be educated if one doesn’t even know the correct manners of using toilets. Compared to public toilets in some countries which are very clean, ours are like toilets in hell. Malaysians have a bad habit of not cleaning or flushing the toilets after using them. In short, we lack civic-consciousness in our hearts. Being irresponsible, we don’t care about people who are going to use the toilets after us. We should be embarrassed but we are not because we simply don’t care.

I still remember when l was a school principal, one of the challenges that l encountered was ensuring that the students’ toilets were always clean but it was really a gargantuan task with more than one thousand students sharing them. I kept hammering into the heads of the students about the importance of clean toilets but to no avail. I sincerely admit that I failed despite various measures taken to instil positive toilet culture among the students.

When I was in Bandung, Indonesia I went to a toilet at Paris Van Java Mall. It was really awesome because it was clean but the layout and design were unconventional. It was decorated with abstract paintings, plants, flowers, and fish. Do we have to visit these toilets so that we can emulate them? Even if we have such toilets, I am afraid that our people won’t even know how to appreciate and maintain them.

Over the years we have all sorts of campaign for clean toilets but frankly, like other campaigns, they haven’t achieved much. Our toilets leave much to be desired.

However, we should not give up. Take heart from a resolution that declared World Toilet Day entitled ‘Sanitation for All’ which was adopted in 2013. The resolution urged UN member states and relevant stakeholders to encourage behavioral change and the implementation of policies to increase access to sanitation among the poor, along with a call to end the practice of open-air defecation, which it deemed “extremely harmful” to public health.

“The impact of exposure to human faeces on this scale has a devastating impact upon public health, living and working conditions, nutrition, education and economic productivity across the world. SDG 6 aims to ensure that everyone has a safe toilet and that no-one practises open defecation by 2030,” the report said.

Equally important is proper toilet manners should be inculcated and practised. Like the Japanese and people of other developed nations, we should educate our children starting at home. Our schools should also play effective roles in educating proper habits. We should have a proper maintenance culture.

Maszlee’s successor must be a better person

Transition of power still an issue

Asean must meet on transboundary haze