This followed the arrest of a 29 year-old man from the same village on Monday (March 30) around 1.30 pm.

The suspect was apprehended by a team of police personnel from Miri Criminal Investigation Department (CID) acting on a tip-off.

It was believed that the suspect had broken into the house on Sunday morning and carted away the two cooking gas cylinders.

During the incident, the house owner was away working in Bintulu. He learnt about the buglary from his cousin who called him that Sunday.

A police report on the incident was made on the same day.

The case is being investigated under Section 457 of the Penal Code. 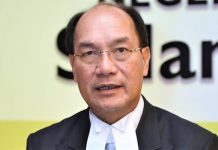