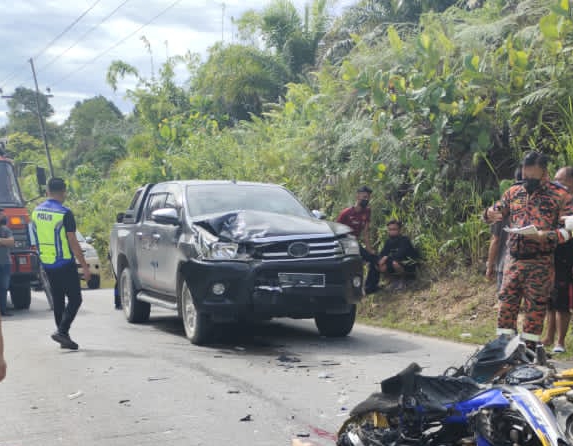 MUKAH: A 13-year-old motorcyclist was killed while his pillion rider, also 13, was seriously injured when their motorcycle collided with a four-wheel drive (4WD) vehicle at Jalan Dijih, Selangau near here on Saturday (Oct 23).

Mukah police chief DSP Muhamad Rizal Alias said prior to the accident, which occurred at about 9am, the 4WD was travelling from the Dijih junction towards Sebakong.

“Along the road, a collision occurred when the motorcycle suddenly entered the opposite lane,” he said in a statement today.

He added both the motorcyclist and his pillion rider were not wearing helmets.

Fernandez, who sustained serious head and body injuries, was pronounced dead at the scene by paramedics from the Selangau Health Clinic.

His body was taken to the Mukah Hospital while Erreylister was brought to the Sibu Hospital for treatment.

The case is being investigated under Section 41(1) of Road Transport Act 1987.