KUCHING: SugarBun (SB) will be establishing its first outlet in Jakarta, Indonesia by end of October.

Barry (third left) and Raymond (third right) handing over the memorandum to each other while witnessed by Eric (far left), Wee (second left), Chin (second right) and Tracy (right).

“We (SugarBun) hope that Coca-Cola will continue working with us in Indonesia which we will open up the first outlet in Jakarta.

“The outlet will be launched by the end of the month in Kelapa Gading located at the northern side of Indonesia,” Raymond said. 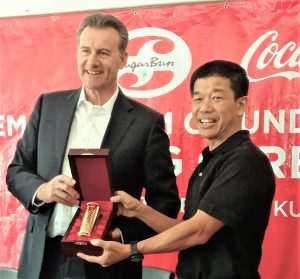 Raymond (right) receiving a Coca-Cola souvenir from Barry after signing the MoU yesterday.

He further added that the SB outlets that are set up in Melbourne and Bangladesh does not just feature the fast food menu but also features the Malaysian cuisines such as ‘bah kut teh’, ‘nasi lemak’, ‘mee mamak’ and others.

He also shared that they are very excited and eager to see how well their business is going to get in Jakarta as the neighboring country there have a big market while in Malaysia, their customer base is blooming especially among the Muslim community.

Apart from that, Barry who responded to a question on re-introducing the Coca-Cola bottled concept said, “In a lot of the market today, that concept has gone out of fashion as logistically, the heavy product is very difficult to manage.

“But we will look into the concept again, even it is just for a special occasion to bring the bottle concept back.

The signing ceremony yesterday officiated the partnership between both parties as well as launching the conversion period for Coca-Cola integration into all 77 SugarBun outlets and 46 Pezzo Outlets across Malaysia and Brunei.

A group photo call with Coca-Cola and SugarBun representatives yesterday after the MoU signing ceremony.