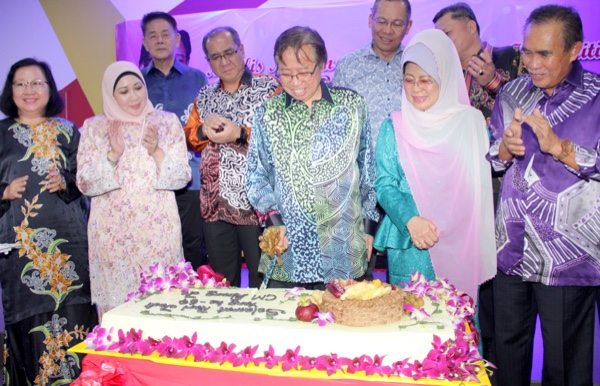 SARIKEI: The state government under Gabungan Parti Sarawak (GPS) will have its own roadmap to make Sarawak the most developed state in Malaysia by the year 2030.

Broadly, part of that roadmap involves building infrastructure to connect all the towns and cities and from there to the rural communities.

Chief Minister Datuk Patinggi Abang Johari Tun Openg said it is for this reason that many development projects are taking place in Sarikei Division.

“Part of our master plan is, there are areas between Sarikei and Betong which we want to turn into a ‘food basket’ to meet both domestic and overseas demand.

“For this reason, the state government is committed to building infrastructure such as roads and bridges in Kuala Rajang, Sarikei right up to Betong.

“We have already begun building Jalan Pasi which connects Sarikei to Tanjung Manis.

“We will also build Batang Lassa bridge which costs about RM600 million and Paloh bridge worth RM300 million, as well as supplying water and electricity to the communities along the way.

“When the infrastructure is in place, we will have road connectivity, thus this whole area will become an area for food production and modern agriculture industry through fertigation and Internet of Things (IoT) methods.”

He said this when officiating at a state-level Merdeka Day tea reception held at Sarikei Innovation Centre yesterday.

Abang Johari hinted of “a certain allocation for one more policy”.

“However, let us wait as I will only announce this in the state budget this November,” he said.

“The first one is July 22, 1963 when Sarawak witnessed the appointment of a local Sarawakian to lead the government administration for the first time which symbolises the state’s independence from colonisation.

“The second one is Aug 31, 1957 when the peninsular (then Federation of Malaya) declared independence from colonisation. Today Sarawak is happy to join and celebrate this day with them.

“The third one is Sept 16, 1963 when the Federation of Malaya joined Sabah and Sarawak to form a new country named Malaysia.”

The chief minister went on to say that Malaysia is a successful nation today because “we respect the Federal Constitution and MA63 (Malaysia Agreement 1963).

“It is important for all of us to remember this history as a platform for us to develop Malaysia in the years to come.”

How UCTS adapts to Covid-19 pandemic