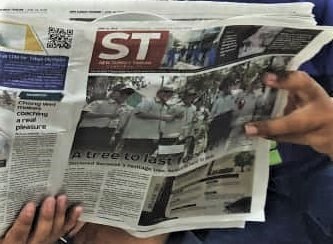 A New Sarawak Tribune reporter yesterday interviewed members of the public to know what their opinions on the change are.

Gelau Dana when met by the reporter said that the tabloid format was easier to handle and carry around due to its compact size.

“This is convenient, especially for people who often consume their news while on-the-go,” he said.

For Lorretta Kong, who works as a teacher, she said that tabloids are smaller and easier to read while travelling.

“Because they’re smaller, stories in tabloids are shorter compared to longer broadsheet stories where there is often too much information,” she said.

As for Iskandar Joni, he said that many city dwellers prefer tabloids because they are easier to carry and read while on the road or bus.

“Apart, from that I think youngsters prefer to read tabloid newspapers because it’s easier to carry, contain shorter stories and easier to digest information due to their busy lifestyles,” he said.