“The Tagang system that is developed not only preserves the river ecosystem but also increases the source of income for those rearing the fishes.

“These fish are not being caught excessively but through the Tagang system, it is managed by a community that has a control system using a colour code.

“That means if the fish is labelled as red, it cannot be caught; if yellow, it can be caught once a year and green means it can be caught anytime,” he said when visiting the Tagang system project at Long Tengoa, Trusan recently.

He said at the site, various types of fishes are reared such as tengadak, semah and many others. He added that there are 124 areas statewide where the Tagang system is employed including the site in Long Tengoa.

Meanwhile, the Bukit Kota assemblyman said the Tagang system in Long Tengoa is also used as a tourist spot.

“In 2020, an estimated 700 visitors came to this area which is also used as a picnic site. There is no entry fee but visitors will be charged for renting safety floats and buying fish food,” he said. 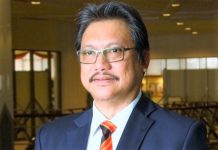