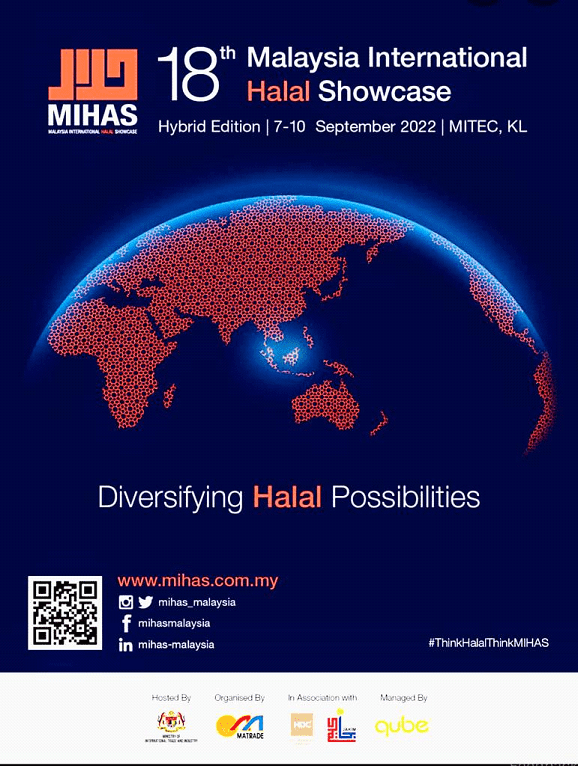 Taking halal to the next level

Since its inception, MIHAS has served as a catalyst to ensure that a thriving halal trade contributes significantly to the global economy. As a showcase event, it is a robust marketplace which brings both international and local players together to capitalise on opportunities for halal products and services, including pharmaceuticals, medical devices, finance, modest fashion, personal care and cosmetics, green technologies and even Muslim-friendly tourism.

In an unprecedented first, MIHAS 2021 was successfully conducted in a fully virtual format because of the COVID-19 pandemic. The pandemic did not stop MATRADE from doing what it does best — promoting Malaysia’s exports to the rest of the world and connecting the players in the industry.

MIHAS 21 proved yet again that MATRADE’s iconic event was able to adapt quickly to the changing business environment and to protect MIHAS’ reputation as the leading platform in the world’s halal community. MATRADE was quick to adapt to the needs of the time and moved quickly to the digital platform.

The recently concluded MIHAS 2022 is the 18th in the series and was successfully held at MITEC in Kuala Lumpur from September 7 to 10. It served to anchor Malaysia’s long-standing reputation and pioneering efforts in the global halal economy.

This time around, it has adopted a hybrid format, combining the traditional physical platform with the online digital one, and it was officially launched by the incumbent Prime Minister of Malaysia, Datuk Seri Ismail Sabri Yaakob.

This latest in the series of events was an opportunity for Malaysia to focus on what has been the country’s value-added to the world in terms of the halal economy and reflect upon Malaysia’s pioneering role in this increasingly important and fast-growing sector of the global economy and how to take this to the next level.

Malaysia has been very progressive in the promotion of the global halal economy and has set a good foundation to take its success to the next level. At the launch ceremony, the Prime Minister alluded to this when he said, “I am delighted to learn that for nine years in a row, Malaysia maintained its top position, outpacing other 81 countries, according to the Global Islamic Economy Indicator.”

Malaysia has been successful in its initiatives to strengthen our halal economy and to enhance the ecosystem. I believe more can still be done along the whole value chain. In addition, it needs to be recognised that the real opportunity now lies elsewhere.

In an increasingly globalising marketplace for halal products and services, the opportunities are endless. By combining the strengths and huge market potential of ASEAN, especially Indonesia, Malaysia, Thailand and the Philippines, where concentrations of Muslim populations are found, it is logical and worthwhile to build a regional platform to catapult the region onto the expanding wider global arena.

A recap may be useful at this juncture by taking a quick revisit of the concept of halal, the underlying principle that keeps the whole platform and idea of halal trade intact. The word “halal” literally means permissible, and in translation, it is usually used in the context of being legitimate and lawful. The concept of what is permissible or forbidden is determined according to the Islamic shariah law and precepts.
Put simply, halal is a concept of wholesomeness, which covers not only the Shariah requirements but also incorporates the ideas of sustainability, environmental stewardship, social and societal responsibility, and good governance.

I believe the concept of wholesomeness embedded in the term “halal” already captures the ideas behind the current nomenclature of ESG, which focuses on environmental, social, and governance to ensure that proper stewardship, social responsibility, sustainability, and good governance in the conduct of industry and commerce are adhered to and realised.

In order to penetrate the global market, the activities of production, processing, transportation, and marketing of halal products and services need to take into account the dimensions of the environment, sustainability, social and governance (ESG dimensions). The world is now concerned about the issues of carbon footprint and renewable energy, which are very important in this day and age because of the climate change phenomenon. In particular, the sources of energy have become a key consideration, with renewable and green energy being preferred over traditional, high-emission sources.

Sarawak and other similar places like Kalimantan will be excellent destinations to achieve both the halal and ESG objectives, with a plentiful supply of renewable and green energy and plenty of available land for quality agriculture production, food processing, modest fashion, and Islamic-inspired crafts.

From a business perspective, a halal business is one that operates on standards that are acceptable per Islamic Shariah law. Halal is not just a dietary concept. In Malaysia, halal certification of restaurants includes the entire logistics chain, including storage, handling, transportation, logistics, halal ingredient sourcing and handling, and cooking. In the halal industry, we also include modest fashion, hotel and lodging concepts, medication, entertainment, travel and tours, and so on, among others. The scope is, therefore, really limitless.

Why is this so? The answer can be explained by the sheer numbers of adherents worldwide. The Islamic community worldwide is 1.9 billion strong. The world’s population will be eight billion people as of 2022. Therefore, Muslims make up almost a quarter of the world’s population. The number of Muslims is increasing annually through birth or conversion.

In terms of valuation, the halal economy is estimated to be worth 3.2 trillion USD by 2028. There will need to be an increase in the production of agriculture, poultry, farming and other agricultural products to meet the demand. That’s just on the food industry side. As mentioned earlier, the concept of halal is extendable to many areas beyond the food industry.

In general, the cost of halal and kosher meat is higher than non-halal meat. Meat that is not halal comes from the slaughter of animals that are electrocuted at the time of slaughter and where the blood is not pushed out of the carcass of the animal. The method is fast and, by definition and comparatively, requires less labour. On the other hand, halal meat requires a clean cut at the jugular, instant death, and where the blood is drained from the carcass as per the requirements of a halal slaughter. Knives need to be sharply maintained, the blood needs to be drained, leading to more time and labour.

In Malaysia, we have read of scandals of non-halal meat being passed off as halal and other scandals within the halal trade. We need to create measures and processes to stop abuses of the system, as JAKIM has earned a well-deserved and well-respected reputation in the marketplace.

JAKIM is the platinum standard in halal labelling. Our halal exports, from chicken to food stuffs, are well recognised internationally. We need to leverage this to expand our market share globally to serve the Ummah. Our reputation in the halal industry is well earned, and this needs to be protected at all cost.

Malaysia has also been a pioneer in Islamic finance and, over the years, has strengthened the use of Islamic finance as an alternative system to ‘Riba’ based banking and insurance through sukuks and other financial product ranges.

We also have hajj, which is a pillar, and umrah, which is the minor pilgrimage, creating demands around it. The current hajj capacity is five million pilgrims and will likely increase in time to meet demand as Muslims need to complete their hajj obligations.

The hajj season is where companies operating in the halal industry can realise income on an early basis, and it’s limitless. Thus, we have to examine halal from multiple angles. In the halal showcase, we have seen many focus on food, modest fashion, Islamic finance and e-commerce. This augurs well for the halal trade and industry.

Perhaps we have never examined, or have yet to examine, halal as an ecosystem. Bringing all the pieces together domestically or nationally is important and the cross-border linkages and expansion is a logical next step. Imagine reaching out to the 1.9 billion adherents of Islam, in a global ecosystem. Also, we are always focused on specialist markets but not value adding to the customer in a customer centric approach. By putting the customer at the centre, the potential is indeed enormous.

There are many companies looking at blockchain and crypto currencies, but the focus has always been on the speculative element. Let us look at the technology per se. Blockchain can be used in the food industry “from farm to table”. A blockchain is a database or ledger that stores data on a product and can also transact via crypto currency.

With the advent of digital currencies like the e-yuan and stable coins, and crypto currencies such as bitcoin, among others, the future presents enormous potential in the halal trade. The technology doesn’t allow any tampering as all of the data is coded. We can envision working with fiat to crypto technologies such as web3 and it’s the way forward that allows us to move away from traditional practises of buying a banking product. It can also act as a wealth management platform, giving the user total control.

The digitalisation of halal and what constitutes shariah compliant crypto usage enables humans and technology to move forward. The technologies allow us to examine the buying, spending and investing habits of a clientele, allowing us to tailor more products to move forward.

Again, the possibilities are limitless, and the size of the market, which is currently at 1.9 billion adherents, can only grow. By leveraging technology and developing an ecosystem that facilitates safe and efficient halal transactions, the halal industry can be taken to the next higher level. Because of its stringent requirements to ensure the halal effect is there, the high integrity and ethical basis of the system will likely draw many enlightened customers globally, not just adherents of Islam as a religion and way of life.

In summary, digitalisation is an enabler that will allow the halal industry to reach its fullest potential and must be embraced. Also, in tying halal’s concept of wholesomeness to the ESG framework, the halal industry will be able to go to the next level, ensuring even wider acceptance of halal products and services beyond the 1.9 billion adherents of Islam.

As the world’s largest halal exhibition, MIHAS has already taken the global halal economy to the next level. The opportunities to build on this strong foundation are enormous, limited only by one’s imagination and creativity.

NOTE: The views and opinions in this article are the writer’s own and do not purport to represent the views of Matrade, this newspaper or anyone involved in the halal industry.