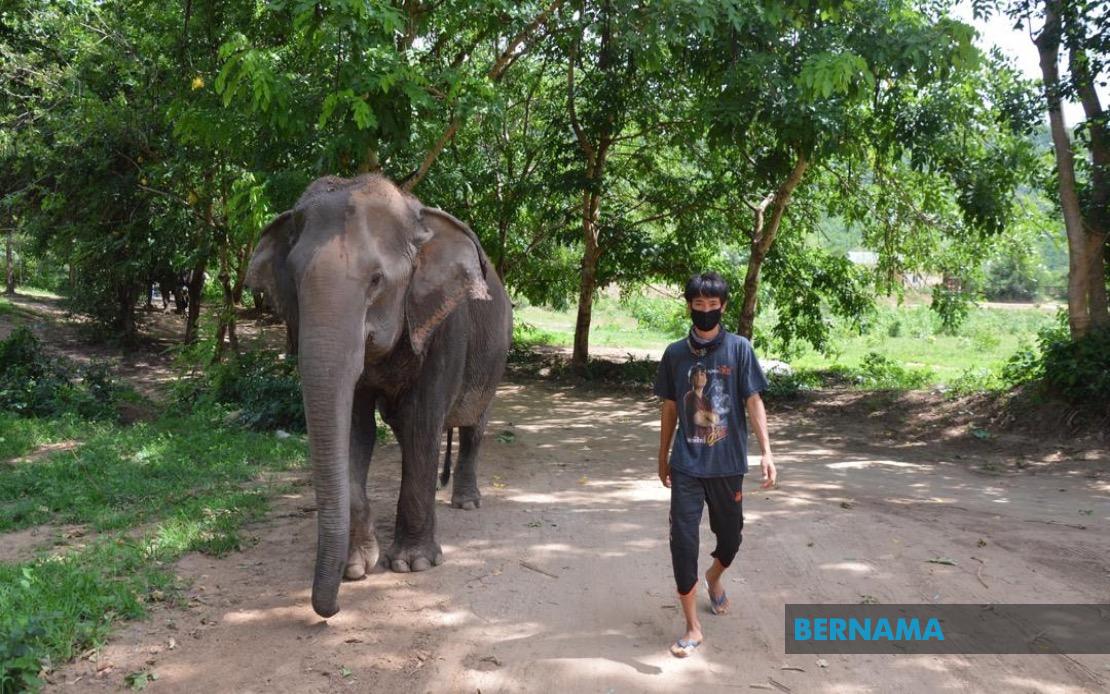 BANGKOK: Gai Na and To-Me – two female elephants aged 60 years and 56 years, respectively – frolic by the riverbank under the scorching sun at Elephants World in the western province of Kanchanaburi, located about 200km from Bangkok.

Nearby, a 24-year-old mahout named Ehdar sat under a tree, closely watching the elephants.

“It is good to see them roaming freely here. No riding, performances nor tricks. They live a happier life here compared to those at riding camps,” he told Bernama.

Elephants World is a refuge that provides a home and food for a small number of elderly and injured local elephants, of which Gai Na and To-Me are among the lucky ones.

This is because other elephants offering rides and performing tricks at places such as commercial elephant camps or amusement parks are facing starvation due to the Covid-19 pandemic affecting tourist-dependent Thailand.

Global travel ban and closure of elephants’ camps to contain the spread of Covid-19 mid-March forced camp operators to put up their elephants for sale, while many returned home after decades in the tourism industry as the mahouts struggle to feed the animals. Some 1,000 elephants and their mahouts at such camps have been left unemployed following the outbreak.

In Chiang Mai alone, more than 100 ‘jobless’ elephants and mahouts embarked on a long journey from tourist sites to their native village of Mae Chaem district in northern Thailand, inhabited by the Karen – an ethnic group who are traditionally elephant keepers for generations.

It is estimated that there are about 4,400 captive elephants in Thailand, where more than half of the number has been working in the tourism industry by offering elephant rides and performing tricks.

Founder of Elephants World, Samat Prasitpon, said the refuge for elephants was impacted when tourists started to disappear in late January before it was closed in mid-March amid global travel ban to halt the spread of COVID-19.

“As there are no visitors, we are facing a difficult time with expenses. We lay off about 50 per cent of our staff.

“And one elephant eats an average of 300 kilogrammes of food daily, which costs about US$900 per month,” he said.

Samat managed to breathe a sigh of relief as Elephants World reopened its door to visitors on June 5. With the absence of international tourists, he hopes for generous donors to come forward and support the foundation.

As of now, Elephants World is home to 22 sick, old, handicapped, and mistreated elephants. Most of the elephants – costing about 100,000 baht each – were from riding camps and circuses.

Founder of Save Elephant Foundation (SEF) in the northern province of Chiang Mai, Sangdeaun ‘Lek’ Chailert is also racing against time to help the starving elephants by moving them out of elephant-riding camps, circuses and ‘sanctuaries’.

Lek Chailert said some controversial camps and “sanctuaries” conduct abusive methods to train the elephants to perform tricks and rides to attract tourists for ‘once in a lifetime experience’.

She added that the ritual of elephant-taming to ready the animals to perform involves “phajaan” or ‘elephant crushing’ where the training include baby elephants being taken from their mothers, confined to a small place, introduced to bullhooks, and are starved and deprived of sleep to make them submissive and obedient to humans.

“The timing is right now… A sustainable future is the only way we can protect these beautiful animals. We must make this a reality and give elephants the life they deserve,” she said.

Before the Covid-19 outbreak, the animal activist was already working closely with elephant camps owners and mahouts to find ways to feed the animals without depending on performances or riding activities, and at the same time convert the camps to sanctuary-based models with ethical elephant care ― with the support of SEF.

“SEF has engaged and transitioned more than 30 trekking and performance camps to ethical programmes where elephants live their lives with dignity and respect,” she said, adding that SEF is feeding approximately 1,745 elephant ―and the number is growing fast.

With the effort of SEF, one of the longest elephant riding and performance camp in Thailand has agreed to remove saddles from all 78 elephants under their care and shift to the sanctuary model, Lek Chailert said.

She said the cruel training methods have come to light to many and as a result, touring and travel companies have stopped promoting and offering elephant trekking.

“It is great that the elephants are free from trekking. However, they cannot be set free into the wild ― contrary to common public misconception ― and must still be fed and cared for due to the fact that they have been in captivity their entire lives,” she said.

Lek Chailert also urged the government to allocate some land for villagers to grow crops to feed the giant animals and make some extra cash.  – Bernama