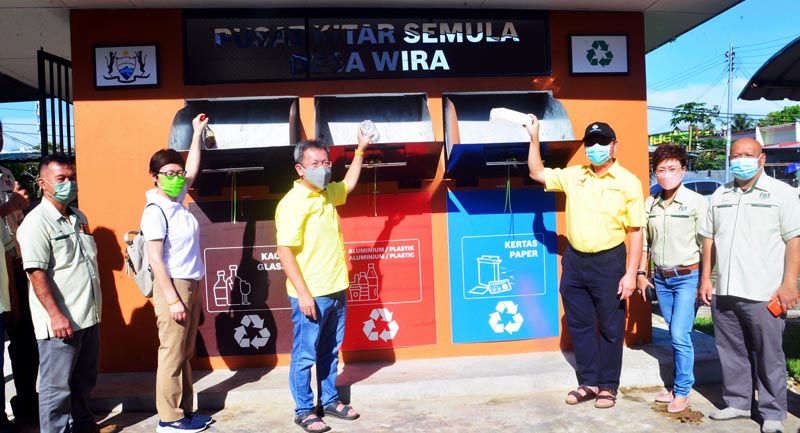 KUCHING: Everyone should practise the 6Rs – reduce, reuse, recycle, rethink, refuse, repair – to support sustainability and lessen the funds required for waste management.

Deputy Chief Minister Datuk Seri Dr Sim Kui Hian said this was an expansion of the initial 3Rs (reduce, reuse, recycle), aimed at encouraging a change of mindset among the people towards more sustainable waste management.

“The annual budget of Padawan Municipal Council (PMC) is RM47 million and they spend a large portion of it – RM9 million – on waste management,” he said when officiating at the opening of the Desa Wira Recycling Centre here on Saturday (Feb 26).

He said the government spent tens of millions on proper management of waste at landfill sites.

“First, a lot of money is spent on digging the hole and lining it properly to prevent the waste from leaking into the water system. Then, more money is spent on covering up the landfill once it is filled with waste. This amounts to tens of millions,” he said.

As such, he called on the public not to throw their waste everywhere or illegally dump their rubbish.

He urged everyone to play their role by upholding the 6Rs.

Elaborating on the Desa Wira Recycling Centre, he said it was completed on Dec 24 last year to provide the local community with a facility where they could place items for recycling.

“That means everyone has do their part. If there is illegal dumping, take a photo or video and send it to the local council so they can charge the irresponsible persons,” said Dr Sim, who is also Public Health, Housing and Local Government Minister.

He urged everyone to fully utilise all the recycling centres distributed throughout the various councils’ areas of jurisdiction.

He said among the benefits of a recycling programme were reducing the amount of waste sent to landfills and incinerators, conserving natural resources such as timber, water, and minerals and increasing economic security as well as preventing pollution.

“We hope that as Sarawak becomes prosperous and strong, we also keep up with the world standard,” he said.

Dr Sim added that the Natural Resources and Environment Board (NREB) had completed the masterplan for solid waste management in Sarawak, which would be tabled in the State Cabinet soon.

Meanwhile, PMC chairman Lo Khere Chiang said the council’s collection of rates from households in their area only amounted to approximately RM25 million, less than what was needed for the council’s expenditure for services and so on.

“The state government is a caring one. We reduce the rates and tariffs so that our people will not be burdened. Once we reduce the rates, where does the money come from? It comes from the Ministry of Local Government.

“We are lucky to have our minister who is very proactive and understands the needs of all the councils throughout Sarawak,” he said.