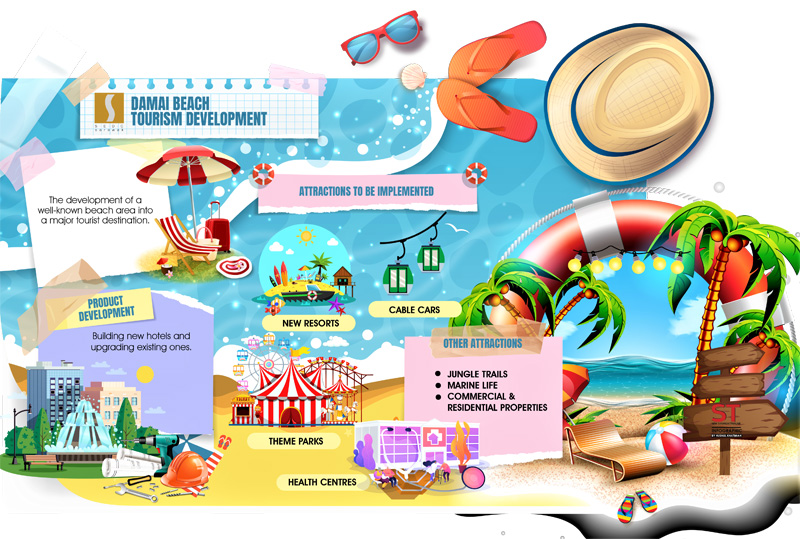 Chairman Tan Sri Abdul Aziz Husain said SEDC would be able to identify the priority areas once the masterplan is completed in a year’s time.

“Among others, the development will include new resorts, theme parks, cable car, jungle trails and trekking facilities, wellness and health enclaves, marina and commercial and residential properties.

“This is also in line with SEDC’s strategic plan to transform the popular seaside area into a bustling tourism destination with the proposed name – Damai Resort City project,” he told the press after a visit to Sarawak Cultural Village (SCV) in Santubong near here today.

The first phase would see the renovation of Damai Lagoon, which would cost an estimated RM100 million.

“After that it will be followed by the second phase of development of the Damai Lagoon, incorporating the marinas, while others will be done at a later stage.”

He also said tourism players and the private sector were encouraged to work together with SEDC to develop other tourist attractions in the Damai peninsula.

“In November last year, Chief Minister Datuk Patinggi Abang Johari Tun Openg announced that the Sarawak government had chosen SEDC to take the lead in the development of tourism products, including the construction of new hotels and upgrading existing ones.

“This is in line with our state government’s efforts to collaborate with the private sector on tourism development, which is one of the four priorities under the 12th Malaysia Plan.”

In the meantime, Abdul Aziz said among the development initiatives and improvement works that had been undertaken by SEDC last year included the refurbishment and upgrading of 239 guest rooms and corridors, third floor function rooms and other related works at Puteri Wing of Riverside Majestic Hotel.

Seven foreigners rounded up in Bintulu