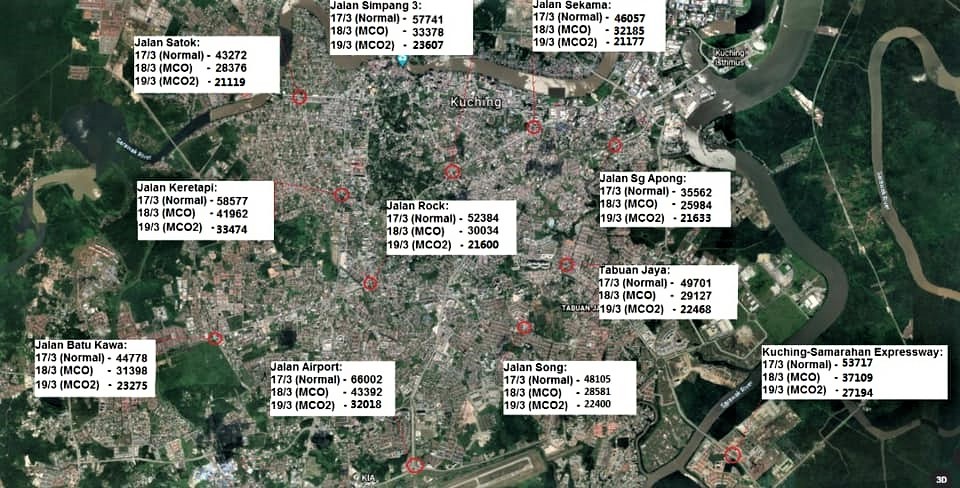 KUCHING: The southern part of Kuching recorded a reduction of up to 59 per cent in terms of traffic movement following the 14-day movement control order (MCO) issued nationwide.

In an infographic shared by Local Government and Housing Minister Datuk Seri Dr Sim Kui Hian on Facebook on Saturday, he detailed that the figures were obtained from the Smart Traffic Light system implemented in the city.

Saturday’s set of data is an update to a similar Facebook posting last Friday where he said that he is indirectly monitoring the compliance of MCO through the 11 traffic lights.

“When I authorised the implementation of Smart Traffic Light for Kuching South City Council (MBKS) in 2017-18, I was aiming for Kuching to be a Smart City.

“I never thought of its potential in monitoring pandemic Covid-19 crisis,” he wrote on March 20.

Jalan Simpang 3, at the heart of the city recorded 59.12 per cent reduction from 57,741 vehicles to 23,607 vehicles in traffic from March 17 until March 19, which was the second day of MCO. This is followed by Jalan Rock which recorded a reduction in traffic by 58.77 per cent.

Meanwhile Tabuan Jaya, Jalan Sekama and Jalan Song recorded a reduction by 54.79 per cent, 54.20 per cent and 53.44 per cent respectively.

Jalan Sungai Apong recorded the least traffic reduction by March 19 with it only garnering 39.17 per cent reduction from the 35,562 vehicles passing it before the MCO.