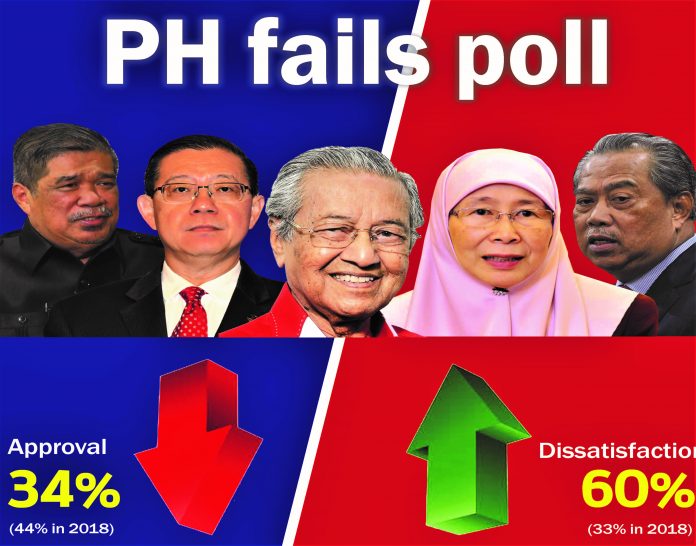 KUCHING: The Pakatan Harapan federal government only garnered 34 per cent approval in terms of protecting the interests of Malaya’s federation partners, Sabah and Sarawak.

From a survey conducted by Merdeka Centre, the level of trust on Putrajaya to keep the East Malaysians’ interest at heart plummeted from 44 per cent in 2018 to 34 per cent in 2019.

It is also noteworthy that the level of dissatisfaction over the federal government’s handling of the two states experienced a sharp rise from 33 per cent in 2018 to an alarming 60 per cent in 2019.

It is also mentioned in the survey that among the critical issues ahead faced by the federal government would be the upcoming state election slated for 2021, if not earlier.

There was no mention by Merdeka Centre of the reason behind the dissatisfaction but it is widely believed that there is friction between Putrajaya and the state government as evidenced by disagreements over the past year.

Last year, an attempt to amend the Federal Constitution was done to purportedly restore the status of both Sabah and Sarawak, which failed because it didn’t get the two-thirds majority in the Dewan Rakyat.

The state government shot it down because it did not meet its expectations.

The two government butted heads again when national oil and gas company Petroliam Nasional Berhad (Petronas) which is controlled by Putrajaya refused to settle the five per cent oil and gas tax to the state government.

This led to Sarawak taking the oil exploration company to court, an action which was backed by a majority of the State Legislative Assembly (DUN) members.

The Merdeka Centre survey also concluded that PH’s loss in Cameron Highlands, Semenyih and Tanjong Piai by-elections was a wake-up call to that coalition and that the Shared Prosperity Vision 2030 (SPV) takes too much time.

It also concluded that there are questions over the waning strength of PH due to the issue of power transition between Prime Minister Tun Dr Mahathir Mohamad and his would-be successor Datuk Seri Anwar Ibrahim.

2022 State Budget to be approved without DUN sitting