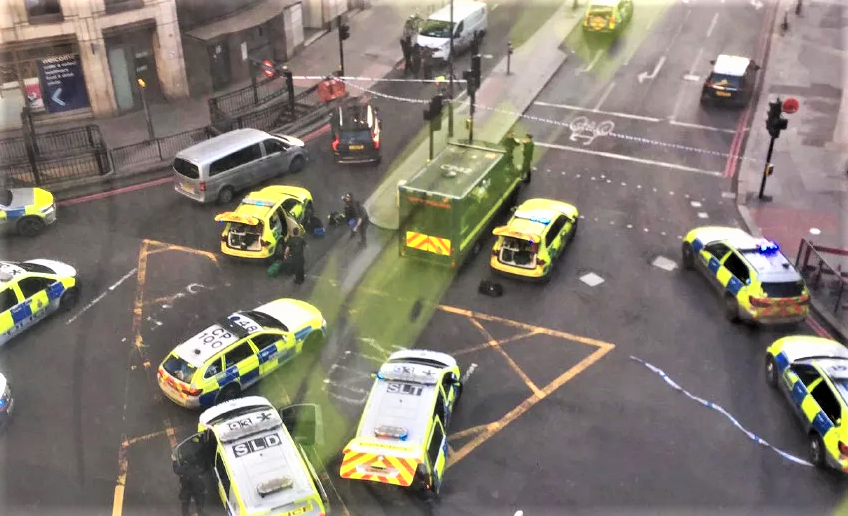 Two killed by knifeman as terror returns to London Bridge

LONDON: A man suspected of stabbing two people to death in a terror attack on London Bridge was a former prisoner convicted of terrorism offences and released last year, police said Saturday.

The knifeman, wearing a suspected hoax explosive device, was shot dead by police after the daylight assault on Friday that also saw bystanders intervene to try and disarm him.

Three more people were wounded in the stabbing spree that came less than two weeks before Britain votes in a general election, and revived memories of a three-man attack two years ago on London Bridge that killed eight.

Police named the suspect as 28-year-old Usman Khan, saying they were not actively seeking others in relation to the incident.

“This individual was known to authorities, having been convicted in 2012 for terrorism offences. He was released from prison in December 2018 on licence,” Neil Basu, head of UK counter-terrorism policing, said in a statement.

Basu said Khan had attended an event on Friday afternoon at Fishmonger’s Hall, a historic building on the north side of the bridge in central London.

“We believe that the attack began inside before he left the building and proceeded onto London Bridge, where he was detained and subsequently confronted and shot by armed officers,” he said.

Footage filmed by eyewitnesses and shared on social media showed a scrum of people tackling the suspect on the ground before the police arrived.

One man, wearing a suit and tie, was seen carrying a large knife away from the group.

Tour guide Stevie Hurst, who ran from his car to the scene, told BBC radio that “everyone was just on top of him trying to bundle him to the ground”.

“I saw that the knife was still in his hand so I just put a foot in to try and kick him in the head: we were trying to do as much as we could to try and dislodge the knife,” he said.

Metropolitan Police chief Cressida Dick said she was “deeply saddened and angered that our city has again been targeted by terrorism”.

The stabbings took place on so-called “Black Friday” — one of the year’s busiest shopping days in the run-up to Christmas.

It came just hours before three minors were stabbed in a main shopping street in the centre of Dutch city The Hague, with the victims later released from hospital.

It was not immediately clear if the two attacks were linked.

Prime Minister Boris Johnson, who is hoping to win a majority in a December 12 election to enable him to take the country out of the European Union, cut short a visit to his constituency to return to central London.

He praised the emergency services and the public for their response and before chairing a meeting of the government’s emergencies committee, said he had “long argued” it was a “mistake to allow serious and violent criminals to come out of prison early”.

Johnson’s Conservatives and the main opposition Labour party have both pledged to put at least 20,000 more police officers on the streets.

But Brexit has raised questions about the extent of continued cooperation with Europe on security and intelligence matters.

Basu said Khan had been living in the Staffordshire region of central England and officers were searching an address in that area.

A security source told the domestic news agency Press Association that the suspect was linked to “Islamist terrorist groups”.

During the attack, he had been wearing an electronic tag used to monitor criminal offenders, according to a report in British newspaper The Times.

He also had equipment strapped to his body that police said they believed to be a “hoax explosive device”.

The event at Fishmonger’s Hall was called “Learning Together”, Basu said — part of an educational project run by Cambridge University academics.

A page on the university website says the initiative “brings together people in criminal justice and higher education institutions to study alongside each other”.

After the attack, the bridge was closed, with evacuated buses at a standstill and forensics officers at the scene.

A White House spokesman said President Donald Trump had been briefed on the attack and was monitoring the situation.

Trump, who has previously criticised London’s mayor and stabbings in the British capital, is due to visit next week for a Nato summit.

On November 4, Britain downgraded its terrorism threat level from “severe”, the second-highest of five levels, to “substantial” — the lowest rating in more than five years.

The 2017 London Bridge attack involved Islamist extremists in a van who ploughed into pedestrians on the bridge before attacking people at random with knives in nearby Borough Market.

Eight people were killed and 48 wounded. The three attackers, who were wearing fake suicide devices, were shot dead by police. – AFP