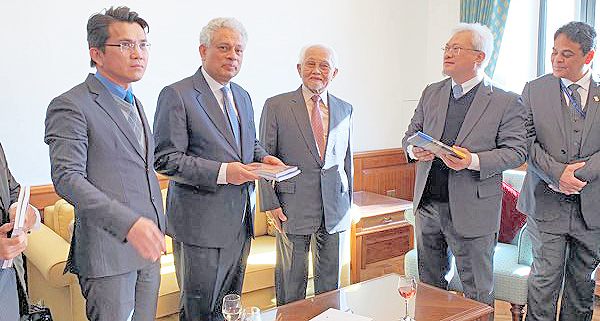 The books are titled “Development and History of Wali Songo” and “Wali Songo Travelogue”.

UiTM Sarawak in a press statement issued yesterday said both books were inspired by Taib who wanted the history and experience of Wali Songo or Sembilan Wali on the island of Java to be known to Muslims in Sarawak as well as the world in general.

Taib (centre) at the launch of the books at the Oxford Centre Islamic Centre, Oxford University in London.

This is because the peaceful approach adopted by the Wali Songo in efforts to spread Islam was well-received by the religious target groups.

Oxford Islamic Studies Centre also agreed to have a joint research on Islamic development in Nusantara in Borneo.