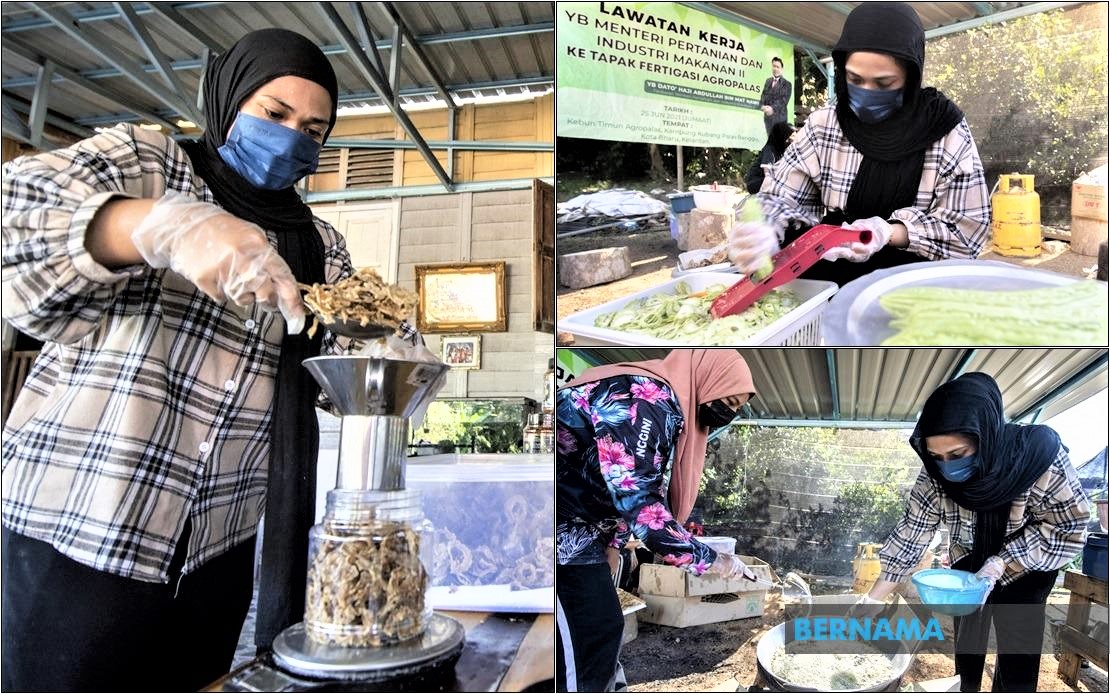 A Universiti Teknologi Mara (UiTM) graduate here has come up with a creative way to prevent the bitter gourds cultivated by her husband from going to waste by turning them into crispy chips infused with a variety of flavours.

Aina Fatini Md Rizan, 24, said she came up with the idea after her husband Mohamad Zulfazli Mohamad Arifin, 28, faced difficulties to market the vegetable due to the implementation of the movement control order.

She said, her husband had planted about 1,000 plants which could produce around 150 kg of bitter gourds within two days before being supplied to markets within and outside the state.

“Although the lockdown had affected the delivery of the crop outside Kelantan, my husband and I decided that we should not let them go to waste.

“I then took the initiative to produce bitter gourd chips early this month,” she said when met by Bernama at her house in Kampung Kubang Palas, Banggu today.

Admitting that it was not easy to venture into a new business without enough knowledge, Aina Fatini, an Information Systems Engineering graduate said apart from going through trial and error, she learnt how to make bitter gourd chips through Google and by watching tutorials on YouTube.

“At the initial stage, I just did it my own way, but the results were not satisfactory as the chips went stale quickly.

“I then decided to take a two-day online course and managed to gain so much knowledge that has helped me to improve my bitter gourd chips,” she said.

Aina Fatini said she began by giving samples to family members and close friends to get their feedback.

As the response was very encouraging, she decided to look into it seriously.

The second child of the five siblings said, to ensure the quality of her chips, she would only choose medium-sized and semi-ripe bitter gourds.

Aina Fatini said more than 30 kg of bitter gourds are needed to produce over 50 packets of chips weighing 170 gm each.

“Usually, I will start the process of making the chips as early as 7am beginning with cutting the bitter gourds into pieces and soaking them in salt water to reduce the bitterness.

“The bitter gourd chips which are produced in four flavours, namely original, spicy, salted egg and cheese are sold between RM15 and RM18 per packet,” she said.

In order to reach out to more customers, Aina Fatini said she used e-commerce platforms like Shopee as well as social media sites such as Instagram and Facebook to sell her bitter gourd chips.

She had also recruited 15 agents in Kelantan and Penang to sell her product and managed to earn more than RM800 a day.

Back to exploring the world

BELAGA: Being a teacher is admittedly not an easy...

MIRI: Eight people who tested positive for drugs at...

Be creative in tandem with technology

Malaysia, the eight most dangerous country to drive in