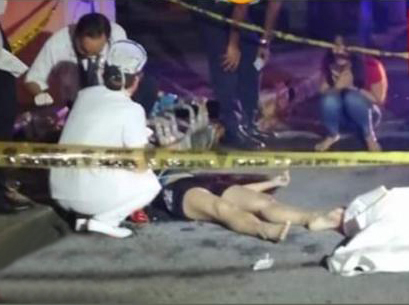 Girl asked her followers on Instagram to vote D (death) or L (live); most chose D

KUCHING: Life must have been very hard for a sixteen-year-old who asked her friends to vote whether she should live or die.

If they had known what she was going through they would probably not have given her the votes to end her life.

Unfortunately, only 31 per cent of them voted “live” on her Instagram (IG), while an overwhelming 69% ticked “death”.

At or about 8pm Monday, Davia Emelia was found sprawled lifeless on the tarmac, blood oozing out of her head.

The Form Four student, whom a neighbour described as “studious and hardly ever without a book in front of her whenever she sat at a coffee shop nearby”, had jumped three floors down from their rented unit in Batu Kawa New Township.

Davia, it would seem, had been struggling with the trauma of having a broken family.

Authorities checked the victim’s mobile phone and found she had created an IG poll which read: “Really Important, Help Me Choose D(Die)/ L (Life)”, and allowed the netizens to decide her fate.
Besides that, she also posted a Facebook status indicating that she was tired of life. Her Facebook post, which was all in caps, read:

Just before the tragedy unfolded on Monday, her step-brother asked her to join him for dinner but she refused.

When her step-brother returned home after dinner, he was shocked to find Davia sprawled on the pavement.

Davia, whose body was taken to the Sarawak General Hospital morgue for post-mortem, did not leave any written message, but police did not suspect any foul play.

Too early to be jubilant

The food supplies are coming!