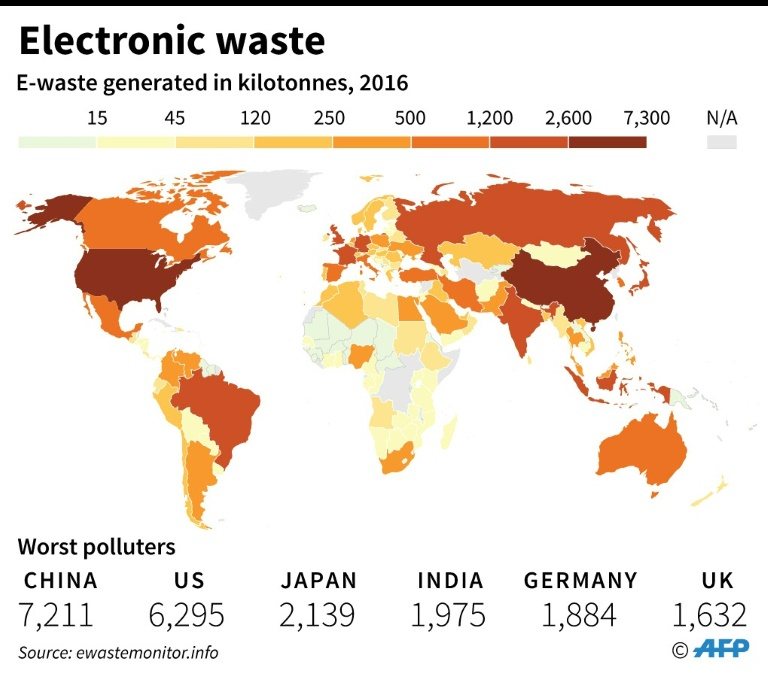 Weighing more than all commercial airliners ever built and worth more than most countries’ GDP, electronic waste poses a growing economic and environmental threat, experts said Thursday, as they launched a global initiative to clean it up.

The world produces close to 50 million tonnes of e-waste every year as consumers and businesses throw out their old smartphones, computers and household appliances — material worth an estimated US$62.5 billion.

Only a small percentage of the refuse, which contains valuable and reusable materials such as metals and rare earth elements vital for electronics, is ever recycled.

The United Nations, the World Economic Forum and the World Business Council for Sustainable Development, among the rich and powerful gathered in Davos this week, launched the first global call for action to counter what is the fastest growing waste stream on the planet.

“This is needed because if things don’t change by 2050 we will have 120 million tonnes per year of e-waste,” Ruediger Kuehr, programme director at United Nations University and an expert in e-waste, told AFP.

“That’s not too far from today. It will have an impact on our resource availability and it’s impacting the lives of many, many people, especially in developing countries.”

Only 20 percent of electronics are currently recycled, with millions of tonnes ending up in landfills, wrongly mixed with metal waste, or illegally exported to poorer countries for a fee.

In 2016 alone, 435,000 tonnes of phones were discarded, despite containing billions of dollars’ worth of materials.

Just as plastic waste has become a hot-button issue in recent years, organisers of the call for a “global reboot” on e-waste hope governments, businesses and consumers will explore ways of reusing or repurposing electronics to limit the environmental fallout.

Kuehr said better collection networks of e-waste would have a significant impact, as would tech users properly disposing of their gadgets, rather than stuffing them in drawers and cabinets when a new generation comes out.

The average smartphone contains up to 60 elements, mainly metals, that are prized in the electronics industry for their high conductivity and clarity.

So-called rare earth materials used in batteries and camera lenses are increasingly expensive to mine and only exist in a handful of places on Earth.

Yet there is 100 times more gold, for example, in a tonne of mobile phones than in a tonne of gold ore — it’s simply a case of creating enough demand for recycled materials, according to Kuehr.

“If recyclers are tasked with recycling close to 100 percent of materials in electronics they will do their best to do so,” he said.

“At the moment they don’t because there’s no demand for it — resource prices do still allow for mining in the ground. Technologically it’s doable to recycle nearly all (metals in phones and computers) but it’s not economically feasible yet and we need economies of scale.”

As well as old-generation phones and laptops, areas of e-waste are growing as society becomes increasingly electrified: toys, medical equipment, furniture and most automotive parts now contain some electronic material that could be harvested and reused.

E-waste also has a significant impact on health: although it represents only 2 percent of solid waste in landfill, it accounts for up to 70 percent of the hazardous material there.

Developing nations such as Nigeria and Pakistan import e-waste for a fee, and an informal economy has grown up as people comb through shipments for items to resell — potentially exposing them to danger.

“We are shipping our excess equipment to developing countries in order to make a little bit of money out of it and we see a lot of environmental and health consequences from it,” said Kuehr. – AFP

Take a Bao: The history of Chinese steamed buns

Heeladina: A brand born out of passion