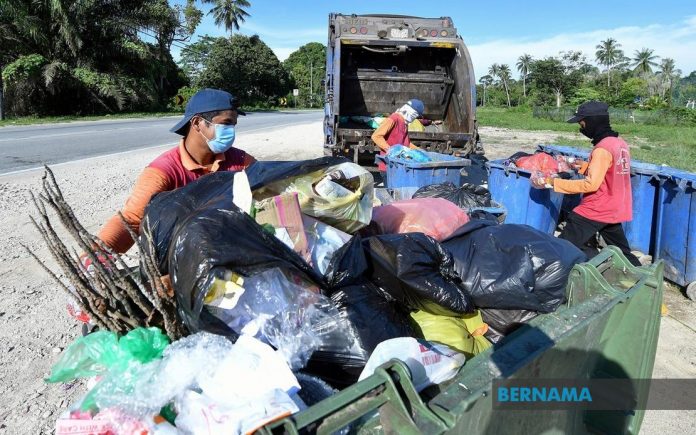 KUALA TERENGGANU: Ever since the outbreak of Covid-19, the term ‘frontliners’ has been vastly used but often confined to those working in the health sector or security forces.

There are many other people in various key services, who have been working equally hard to serve and ensure wellbeing of the people, were left unnoticed.

Waste collectors or garbage men, for example, have been working tirelessly to ensure the most residential areas remains clean and that the people will not have to suffer from foul and unpleasant smell emanating from their domestic waste.

Sharing his three-year experience working as a waste collector with the Kuala Terengganu City Council (MBKT), Mohd Syahir Mazlan, said not only people would look at him with disgust, but he was often ridiculed for wallowing in garbage almost every day.

The 28-year-old said that he had also been scolded by some residents just because the garbage truck that he used was too smelly to pass through their residential area.

“Let the people say what they want. It is not easy to find jobs nowadays and we can’t be too choosy. Not many people are willing to work as waste collecters, so, if I don’t do it, who will?” he told Bernama when met at the MBKT depot here.

Mohd Syahir who was tasked to collect garbage around Manir area said although the pay was not as good as in other industry, he was grateful for being able to generate his own income and served the community.

He said every year, the amount of waste disposed by the public would double during the eve and early morning of Hari Raya Aidilfitri and that was the time when he and his colleagues would be working extra hard so that people could enjoy their celebration in a clean environment.

“However, we foresee that the workload will not be as much this year following the enforcement of the conditional movement control order (CMCO),” he said.

For Mohd Asrol Mohd Aluwi, 36, people’s attitude to littering remained the top cause of headache that he had to face after 13 years working in the industry.

The garbage truck driver said when people did not properly put their garbage in the bin, it would be difficult for his team to collect it, especially when it rains.

“I don’t know why the public acted that way while the garbage bin was still empty. Once I approached an uncle but he scolded me saying that it was not his duty, but mine,” he said.

Meanwhile, MBKT Environmental Health Department deputy director Suzaimi Mazlan said this Ramadan was quite different and easy for their 500 cleaners and 150 waste collectors because no Ramadan bazaars and dining-out were allowed during the MCO period.

“On average, only 230 tonnes of waste were collected since the first day of Ramadan compared to 250 to 280 tonnes daily during the fasting month last year,” he said.