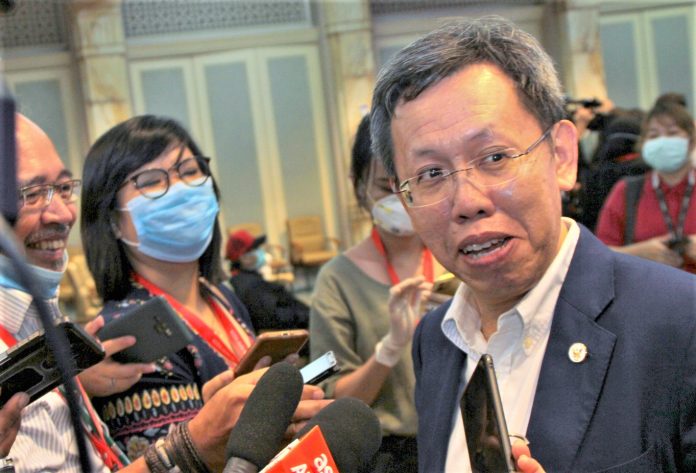 KUCHING: Local Government and Housing Minister Datuk Seri Dr Sim Kui Hian, in his latest Facebook posting yesterday, said ever since the threat of the Covid-19 virus appeared in other countries, the team in Sarawak had already started work on contingencies — and this did not stop even when the threat became an unfortunate reality.

He said while the frontliners today bravely defended Sarawak against the endless attack of this invisible enemy, colleagues and teams had to constantly keep ahead, racing against time to come up with the best solution.

“We must slow this intruder’s advance (flatten the curve) and eventually halt its march. We must hold the line. We must,” he said.

SIm said his cellphone had been buzzing and ringing non-stop with updates, suggestions, complaints and criticisms and he apologised for not being able to answer each one or in detail.

He said most important now was the people’s stand against this invisible enemy that did not sleep.

Speaking of sleep, Dr Sim said it was sorely lacking these days, adding that each time he opened his eyes, he was with mission-critical thoughts and scenarios.

“We are in a time of crisis, and while the Sarawak government is putting all efforts into protecting Sarawakians, we also need every Sarawakian to cooperate by staying strong, and staying united. We are in this together — while we #StayHome, we #StandTogether as one #Sarawak,” he stressed.

Dr Sim also called for everyone to be united against things that tore the citizens apart — rumours, fake news and sensationalism.

“Some may even think it is a good idea to take advantage of the challenges we are in and make cheap shots to score political points.

“This is not the time. Sarawakian lives are at stake. It’s time to stand united. Let’s put our political differences aside, and put Sarawakians first.

“My salute and respect to our frontliners, including the medical, enforcement and defence personnel who left the comfort of home and risk their lives every day so they can save ours.

“Thank you, you are our guardian angels. You have the gratitude of each and every Sarawakian.”

He called on Sarawakians to extend their care and moral support to one another — families, friends, and those risking their lives.

“Together we can overcome this pandemic. To foreign countries that have extended their support of medical supplies to Sarawak’s frontliners, including those from China, you have our deepest gratitude.”